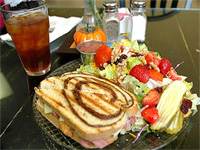 The Partnership for a Healthier America (PHA), together with First Lady Michelle Obama, announced that leading grocery retailers have committed to bring healthy, affordable food to nearly 10 million people over the next five years in the form of new and expanded stores in areas that desperately need them.

Brown’s Super Stores, Calhoun Enterprises, Klein’s Family Markets, SUPERVALU, Walgreens and Walmart have committed to open or expand more than 1,500 locations combined over the next five years in low-income areas that lack stores likely to sell affordable and nutritious foods. The California Endowment, through its FreshWorksFund, pledged to make $200 million in financing available to new, independent retail channels and innovative food distribution programs in California through financing and grants.

Currently, 23.5 million Americans live in low-income areas that lack stores likely to sell affordable, nutritious foods.  Of these 23.5 million, approximately 11.5 million are individuals living in households with incomes at or below the 200% poverty line, and 6.5 million are children.  These new and expanded stores will provide nearly 10 million Americans with the ability to purchase fresh, nutritious foods close to home.

“The commitments we’re announcing today have the potential to be a game-changer for kids and communities all across this country,” said First Lady Michelle Obama. “We can give people all the information and advice in the world about healthy eating and exercise, but if parents can’t buy the food they need to prepare those meals because their only options for groceries are the gas station or the local minimart, then all that is just talk. Let’s Move! is about giving parents real choices about the food their kids are eating, and today’s announcement means that more parents will have a fresh food retailer right in their community – a place that sells healthy food, at reasonable prices, so they can feed their families the way they want.”

“For the 23 million people living without access to healthy, affordable foods, all the reasons in the world to eat healthy are practically moot.  But now, with the companies who have joined us today, and with the visionary leadership of First Lady Michelle Obama, we will help make the healthy choice the easy choice,” said James Gavin III, M.D., Ph.D., chairman of the PHA’s board of directors.  “Perhaps most importantly, the leadership these companies have shown goes far beyond just a statement in a video and a press release.  These companies have signed commitments with the Partnership for a Healthier America, and it will be part of the Partnership’s task to report annually and publicly on each of the companies’ progress – ensuring that the commitments made to build stores where people need them are met. And those commitments are a testament to each of the companies we have here today.”

Brown’s Super Stores committed to build one store and expand one store, by 2016.  The new store will be built in Philadelphia, and the expansion will also be in the area – both will serve a combined 150,000 individuals in low-access areas.

Calhoun Enterprises committed to build 10 stores by 2016.  These stores will be built in Alabama and Tennessee, and will serve a minimum of 10,000 individuals in low-access areas.

Klein’s Family Markets committed to build one ShopRite store by 2016.  This store will be located in Baltimore, Md., and will serve 75,000 individuals in a low-access area.

SUPERVALU committed to build 250 Save-A-Lot stores by 2016.  The stores will be built nationwide, and will serve 3,750,000 individuals in low-access areas.

Walgreens committed to expand a minimum of 1,000 stores by 2016.  The stores will be built nationwide, and will serve 4,785,000 individuals in low-access areas.

Walmart committed to build or expand 275-300 stores by 2016.  The stores will be located nationwide, and will serve 800,000 individuals in low-access areas.

The California Endowment’s FreshWorksFund has committed to leading a coalition to help make $200 million in financing available to new, independent retail channels and innovative food distribution programs in California through a combination of financing and grants.

Every company that works with PHA is required to participate in an evaluation, and all the companies who made a commitment today have agreed to undergo an evaluation process with PHA that will be released to the public annually.

Walmart has committed to build or expand up to 300 new stores.

“By opening stores where customers need them most, Walmart will help build healthier families and stronger communities,” said Leslie Dach, executive vice president of corporate affairs at Walmart. “We believe every single person should have access to an abundant selection of fresh fruits and vegetables at an affordable price.  First Lady Michelle Obama is helping millions of Americans lead healthier lives, and Walmart is proud to partner with her in this work.  The First Lady’s leadership on products, prices and access to healthier food has helped sharpen our focus on bringing affordable groceries to underserved urban and rural areas.”

“With more than 45% of our stores located in areas that don’t have access to fresh food, Walgreens is uniquely positioned to bring more food options to Americans and also provide needed pharmacy, health and wellness services directly in those communities,”  said Walgreens president and CEO Greg Wasson. “Joining with the Partnership for a Healthier America, we plan to convert or open at least 1,000 food oasis stores across the country over the next five years.”

California FreshWorks Fund – Secured $200 million to promote healthy food retailing in California.”Health happens in our neighborhoods,” said Robert Ross, M.D., president and CEO of The California Endowment. “Families can’t eat healthier food if they can’t buy it where they live. The sheer number of banks and other investors involved proves that this is not only the right thing to do to improve the health of our communities, but it’s financially attractive. The more than a dozen partners who made it happen should be congratulated for their vision and collaboration.”