Free Coffee will greet customers from 7 a.m. to 11 a.m. this Thursday at their local 7-Eleven store.

Something’s brewing at 7-Eleven Inc. as its U.S. and Canada stores get ready to celebrate National Coffee Day on Thursday, Sept. 29, with its own caffeinated celebration – CofFREE Day. 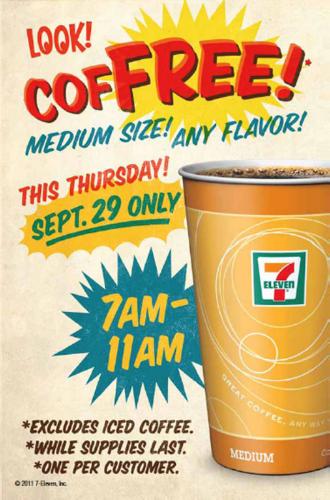 From 7 a.m. to 11 a.m. on this Thursday, participating 7-Eleven stores will give away free medium-size cups of fresh-brewed, hot coffee.

Leading up to the four-hour CofFREE break, 7-Eleven invited its Facebook fans to participate in Dip-a-Drip. This interactive game, hosted on 7-Eleven’s Facebook page, www.facebook.com/7-Eleven, allows 7-Eleven fans to launch a ball that dips a “drip” (aka, obnoxious person) into a giant 7-Eleven coffee cup at a live event to be held Wednesday, Sept. 28, at Union Station in Washington, D.C.

To set up the game, visitors to 7-Eleven’s Facebook page were invited to vote on who they thought was the most obnoxious stereotype – like the Headset-Talker, Know-It-All, Snooty Barista, Over-Sharer and Horrible Boss.

The contest culminates with the obnoxious winners – or losers – being dunked in a giant pseudo-coffee cup set up at Union Station. Participants can take a shot at dunking the target – both in real life outside Union Station and virtually. Fans simply log onto Facebook at www.facebook.com/7Eleven to RSVP and queue up for their turn.

All participants can watch the Dip a Drip in real time as the game will be streamed live on 7-Eleven’s Facebook page. Each successful dunker will receive a $25 7-Eleven gift card.

“Coffee is one of 7-Eleven’s top-selling products,” said Nancy Smith, 7-Eleven’s marketing vice president. “Just like with our Slurpee fans, we have an extremely loyal coffee following. We want to thank our coffee customers for their patronage and have some fun both online and in our stores.

“National Coffee Day is an opportunity to showcase 7-Eleven’s long history in providing coffee on the go,” Smith added. “In fact, 7-Eleven was the first retailer to offer coffee in to-go cups back in 1964 on Long Island. Our coffee bars have become store hot spots with about a million coffee customers customizing their coffee each day.”

In a coffee survey conducted for 7-Eleven earlier this month (September 2011) by Opinion Research Corp. (ORC), more than half of respondents said that making a cup of coffee to match their taste preferences is the most important factor in preparation.

The ORC survey also reported that three of four respondents said they prefer to fix their own coffee rather than have a barista, foodservice employee or machine prepare their cup of coffee. That same number said drinking their cup of coffee is a part of their daily routine and that they always have their coffee fixed the same way.

The U.S. is the number-one coffee-consuming country in the world, followed by Germany and Japan, according to coffee-statistics.com.

Assisting 7-Eleven in developing CofFREE Day and the Dip-a-Drip interactive game is FreshWorks, 7-Eleven Inc.’s advertising and marketing agency, which is a consortium of Omnicom companies.