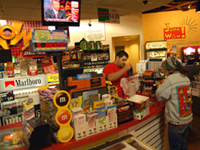 dern Marvels” makes clear in a new episode on the convenience-store phenomenon that there is much more to America’s go-to pit stops than just coffee, soda, snacks and hot dogs.

“The successful development of any store starts with the layout,” said Bona, who has designed convenience stores for more than 30 years, often relying on a zoning system that maximizes impulse-buying while also making the shopping experience as quick and easy as possible. Such innovations, according to the program, have been responsible for the c-store industry’s impressive track record in recent years. Today, there are more than 144,000 stores across the country, with the sector accounting for about one out of every $23 spent in the U.S. in a given day.

Busiest from 6 a.m. to 9 a.m., c-stores are a symphony of coordination—built for speed, designed to influence customers, constantly on guard for crime and equipped to stop it, the show explains. During the morning rush alone, U.S. c-stores sell about 11 million cups of coffee, along with millions of doughnuts, bagels, breakfast biscuits and other items. The average customer visit, however, lasts only 3.5 minutes. To make this happen in clockwork fashion, c-store companies in North America and abroad have relied on Bona’s design expertise for decades. During the program, Bona told viewers about some of the important principles of good c-store layout, such as specific zones designed to help customers get their bearings, to encourage them to make impulse purchases or to help them find everyday items like the morning newspaper.

During the show, Bona appeared at a metro New York area 7-Eleven store (which was not designed by CBX), where he walked viewers through some of these features. In a typical convenience store, he noted in the program, the design of the coffee service area makes it possible to sell hundreds of cups of coffee in a given day with a minimum of wait time for customers. “It’s like a production line,” Bona said. “Somebody comes in, they grab a cup, get their coffee, add their cream and sugar, and then they’re able to move out of the way.”

Explaining that a third of a c-store’s sales can come from cold beverages, Bona pointed out that coolers are deliberately placed farthest from the door, which helps drive traffic through the store. Even subtle details like the location of a cooler’s door hinges can make a big difference in directing how customers move through the space, he explained.

Likewise, the visual experience in any store is critically important. “People buy with their eyes,” Bona said, in describing what he called the “Impulse Zone,” an area of the store stocked with common impulse purchases.

While the featured 7-Eleven store offers about 5,000 different items, its total selling area amounts to only about 1,600 square feet. Certain merchandising principles help maximize the efficiency of this diminutive space, Bona explained. “One of the important things is putting like things together,” he noted.