The Sammy Awards are voted on by Atlas team members who wish to recognize excellence among their peers.

It was a star-studded evening complete with a red carpet and Oscar-esque award statues on Friday, Jan. 27 at the Hyatt Regency in Dearborn, Mich. 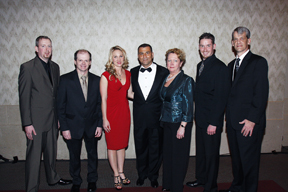 “Atlas Oil is a company that prides itself on its entrepreneurial spirit and core values, said Sam Simon, CEO of Atlas and in whose honor the awards were named. “The Sammy Awards were created to recognize and reward team members for providing valuable contributions to the company.”

Six team members and one c-store were singled out for awards in the following categories:

The event was the culmination of a yearlong team member recognition program where employees voted quarterly for their peers. The Sammy Academy, a volunteer team representing all areas of the company, chose final winners based on the merits of the nominations.

Final winners in each category received an all-expenses paid Royal Caribbean cruise for themselves and a guest along with spending cash.

Unlike top-down reward systems, the Sammy Awards are voted on by team members who wish to recognize excellence among their peers. With a strong corporate culture as a mainstay, Atlas is regularly recognized as a top place to work by its team members.