After adding the new ThermoFresh Digital Server and Brewing system Jiffy Mart expects an increase in sales and a decrease in waste. 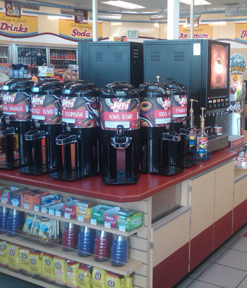 Jiffy Mart has moved away from its mix of air pots and glass pots, upgrading to a new ThermoFresh Digital Server and Brewing system at each of its locations.

The move was made to ensure consistent quality from store to store. “The ThermoFresh server is designed to keep coffee fresh and at proper temperature for two hours whereas coffee held in a glass pot on a warming unit tends to breakdown much sooner,” said Dwayne Cover, Jiffy Mart business manager.  “As a result, we expect to see an increase in sales and a decrease in waste.”

In addition to moving to the new servers, the coffee program got a new look as well.  New wraps for the servers were designed showing the coffee flavor, description of blend and strength of coffee specified by one bean, two beans or three beans.  The wraps also show the co-branding partnership with Lacas Coffee.

Since 1921, Lacas Coffee is one of the nation’s oldest family run coffee importers.  In 2002 they partnered with Jiffy Mart, bringing this premium blend to Carroll County.  Together, Jiffy Mart and Lacas conduct ongoing associate training and program review to ensure the best coffee selections are being offered to the customers.  “Cooper Booth Wholesale also plays a major part in the success of our program by maintaining our equipment on a regular basis and tracking item movement to help determine which flavors are working and which are not,” said Moser.

Located in Mountville, Pa., Cooper Booth Wholesale Co. has been in the wholesale distribution business since 1865 when the Booth Tobacco Co. was incorporated in Lancaster, Pa.  Jiffy Mart and Cooper Booth partnered in 2001 and have been doing business together since.

Jiffy Mart, a division of Tevis Oil, currently operates four stores in Carroll County, Md.  Two locations are in Westminster, one in Finksburg and one in Hampstead.