JEWEL-OSCO, a Midwest food and pharmacy retailer, is observing Hunger Action Month this September with an aggressive campaign to raise food and funds for food banks and food pantries in the retailer’s service area. 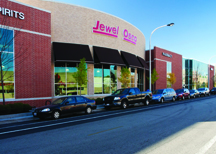 The annual program, called “Give a Little, Feed a Lot,” is going on now at all JEWEL-OSCO stores and will continue throughout the month of September. With nearly 17 million American children living in households that are facing hunger this year, according to USDA, Household Food Security in the United States in 2011, “Give a Little, Feed a Lot” will focus on helping children in need. The program will benefit five food banks—Greater Chicago Food Depository, Northern Illinois Food Bank, the Food Bank of Northwest Indiana, River Bend Foodbank and Midwest Food Bank—as well as hundreds of food pantries and the children and families served by these organizations.

“As a grocery retailer, providing hunger relief is a top priority for us,” said JEWEL-OSCO President Brian Huff. “So we are excited to bring back ‘Give a Little, Feed a Lot’ and do our part to help the food banks and food pantries fight hunger in the community, especially childhood hunger.”

During the campaign, JEWEL-OSCO customers can make monetary contributions when they check out at store registers. Stores are also collecting food donations. In addition, the retailer is partnering with Chicago radio station 104.3 K-HITS, to help raise awareness about “Give a Little, Feed a Lot” through weekly radio appearances at select JEWEL-OSCO stores, including the following locations:

“Give a Little, Feed a Lot” began four years ago. Since the program’s inception, millions of dollars have been raised through food and cash donations.