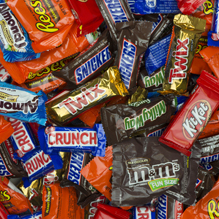 By Erin Rigik, Associate Editor.
While single-serve chocolate and other candy remains solid at convenience stores, the industry is missing a big opportunity to capitalize on holiday and seasonal sales.
The industry has long ceded this prime selling opportunity to supermarkets and drug stores, but growing sales figures indicate this is an opportunity you can no longer ignore.

The National Confectioners Association (NCA) predicted that 2013 will be a strong year for chocolate in convenience stores, and retailers are confirming upticks in sales on chocolate so far this year. SymphonyIRI also confirmed sales were up 3.3% for the 52 weeks ended March 24.
According to a recent report by Mintel, the Chicago-based research firm, the chocolate confectionery market has fared well in a sluggish economy, growing 19% from 2007 to 2012. This growth can be attributed to consumers’ demand for affordable luxuries or indulgence, as well as the foodie culture that has increased interest in premium, high-quality and artisanal varieties of chocolate. Nonetheless, Mintel has predicted slow growth for the chocolate confectionery category in the next five years, with sales growing 15% from 2012 to 2017.

As the economy picks up, Mintel predicts consumer demand for the affordable indulgence chocolate provides will remain, while interest in chocolate as part of the larger food culture will also continue. The firm noted that when deciding to purchase chocolate, some 89% of consumers buy chocolate as a treat or reward, and 87% buy it as a snack option. Approximately 83% of consumers look carefully at the size of chocolate candy packages to determine the best value for the money, and 72% buy chocolate as a way to improve their mood or provide an energy boost.

Capturing Customers
The NPD Group reported that c-stores beat out grocery stores and discount stores as a grab-and-go snack destination, and chocolate candy/candy bars and gum are among the top grab-and-go items that customers demand. In fact, NPD’s snacking research (The NPD Group/SnackTrack, for the two years ended March 2013), found consumers chose a sweet grab-and-go snack twice as often as a salty snack. What’s more, this on-the-go snacking is most likely to occur in the morning or midday, which means retailers could benefit from rotating the products positioned near the entrance and checkout to align with customer buying patterns.

Through repackaging, line extensions and new launches, candy manufacturers are helping retailers drive the category at their stores.

“The biggest thing we’ve seen is the repackaging for the chocolate category—the traditional bars in bite form—and that’s also the thing manufacturers have been advertising and pushing,” said Scott Zaremba, president of Lawrence, Kan.-based Zarco USA (formerly Zarco 66) stores.
From Twizzlers or Jolly Rancher bites to Kit Kat minis and Milky Way bites, the easy-to-eat treats offer a familiar and loved product in a new form, or in some cases, simply new packaging.

“Customers are responding to it because of the different look, so we’re seeing that being a growth item. Right now they’re moving extremely well,” Zaremba noted. His stores feature a large section of these hand-to-mouth products, displayed next to traditional snack items. And while some of these “bites” have been around for years, the new packaging is causing customers to see them in a new light.

Tim Cote, category manager of the 107-unit, Beaverton, Ore.-based, Plaid Pantries, confirmed that the bites are the biggest thing to hit the category this year, adding that Hershey’s Kit Kat minis is the most innovative product he’s seen enter the category.

“The new products that come out do well, but because they are mostly line extensions, they don’t do as well as completely new items to the category,” Cote said. “All the new bite-sized products coming out now are doing just fine, but they’re not really innovative in that they’re taking a concept already in the market—a bite—and stretching it out across more brands. They do fine but it’s not the same excitement as something different.”

Building Excitement
Cote noted that new products are the “lifeblood” of the category and chocolate suppliers can help by putting something completely new in front of the customer that will drive real excitement, particularly the next new everyday item that has the potential to have a 2-3 year staying power.

“When Apple or Samsung come out with a new product everybody has got to have it, and it’s the same thing in candy,” he said. “When the new candy bar comes out everybody wants to try it and you get a good six-month bump and pretty good margin sales.”
Cote has found that in-and-out products and seasonal items do much to drive the category, and today’s customers—especially younger customers who want the next new, hot item—are gravitating toward limited-time only (LTO) products.

For a while, Cote said, LTO was saturating the market causing manufacturers to pull back, but today the pendulum has begun to swing in the other direction, and there isn’t enough LTO today. “We did really well with Mars’ Milky Way French Vanilla this year when it was available,” he said. “LTO can be helpful in driving sales and customer interest.”

Jenn Ellek, the NCA’s director of trade communications and marketing, said the association’s research found that new product releases dropped from 895 in 2011 to 423 in 2012. She believes manufacturers are deliberately taking this “less is more” approach to avoid saturating the category with new products and in order to put as much support as possible behind existing top sellers.

As for what customers want, NCA noted new and unusual spices and flavors, comfort foods, and little bites emerged this year as top category trends, and customers continue to be excited by new flavors and new daring combinations of favorite flavors. As the foodie culture continues to infiltrate the chocolate segment, customers continue to look “across borders and cultures for inspiration” and manufacturers are “borrowing flavors historically not found in the category,” according to Larry Graham, president of NCA.

King-Size Reigns
At Nice and Easy Grocery Shoppes in upstate New York, customers are gravitating toward the pre-priced candy shippers that the various vendors provide. Above all, customers are demanding king-sized candy bars, a trend many category managers have also noted seeing at their stores.

Reece Mahlmann, category manager for the more than 160 Speedy Stop c-stores in Texas, has attributed the king-size trend at his stores to the fact that category manufacturers have raised prices on other sized items, leading customers to see the king-sized bars as a better value for their dollars. Two-for deals on the bigger bars are also driving sales at his stores.

Nice N Easy is also seeing bites selling well at its stores, but at the expense of other sizes. Overall, chocolate sales are up at the 85-store chain by 6%, said Matt Paduano, vice president of category management for Nice N Easy.

But even with new additions to the category, Paduano pointed out that the top 10 selling candy bars have not changed over the last 10 years. “These top 10 make up 38% of all chocolate sales, so that tells you how strong they are versus the other 150 or so SKUs we have sold over the past year,” he said.

While Paduano has observed that gourmet chocolates are doing well in the drug channel, which devotes considerable space to the segment, Nice N Easy has tested the gourmet chocolate segment with some higher end products, but had limited success.

Even as chocolate sales are up, gum and mints have struggled with double-digit sales declines this year at Nice N Easy stores. “The vendors have tried several tactics to get sales up—pre-priced trial packs, price promotions, shippers, etc., but all had a lack of positive results,” Paduano said. “Ice Breakers Cool Mints and Wintergreen Mints are two items that are doing very well in this category, showing 60%-plus growth over last year. As for what customers are looking for in gum and mints, that is a hard one. It looks like the manufacturers are struggling with this as well.”

Seasonal Opportunities
But even as retailers are driving sales on LTO, king sizes and bites, many are missing the opportunity to take advantage of the influx of seasonal items that chocolate manufacturers are now offering, even as other channels are heating up their displays of these categories. Be it the summer road trip, the winter holidays or Halloween, big opportunities abound for linking treats with the seasons. From Mars’ Pumpkin Spice M&M’s to Hershey’s Candy Cane Bar, which is set to debut this winter season, exciting options exist to drive customer interest in the candy segment.

With the winter holidays approaching, customers will be looking for last-minute stocking stuffers, candy they can share with guests during parties and small holiday-themed gifts—and c-stores are in a prime position to meet customers’ last minute needs with a section devoted to seasonal candy products.

NCA has estimated that major holidays like Valentine’s Day, Easter, Halloween and Christmas/Hanukkah will generate more than $7 billion in 2013 in seasonal sale items.
But despite this growth opportunity, the convenience store channel has been slow to dive into this opportunity.

“The candy reps will offer us all sorts of seasonal items. It comes down to whether the wholesale supplier will bring them in. This is usually the issue with seasonal,” Paduano said.

At Zarco USA, the success of seasonal products is all relative to what is being advertised by the manufacturers. “We make sure whatever they are advertising is what we have available. That’s one of the big challenges in our stores—to make sure we’re on top of the next new item,” Zaremba said.