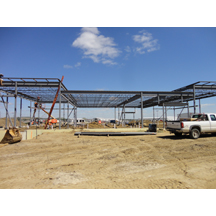 New chain aims to be the premier c-store destination in the open expanse of North Dakota.

It is unprecedented that Convenience Store Decisions would select a Chain to Watch that hasn’t finished constructing its first location, but The Hub Convenience Stores, which is set to open its first travel center model this October in Dickinson, N.D., is already doing many things right.

The Hub’s model combines a flexible format—including a travel center, truck stop and c-store prototype that addresses each site’s needs—with an extensive foodservice platform that features a proprietary grab-and-go food program. In addition, the founders have brought singular expertise derived from both the c-store and fuel side of the business to the virtually untapped area of southwest North Dakota.

The Hub is the brainchild of c-store veteran Jared Scheeler, former director of operations for Bobby & Steve’s Auto World, and Chris Fitterer, a partner in Fitterer Oil Co. and West Dakota Oil Co., and a member of the North Dakota Petroleum Marketers Association’s board of directors.

The Hub aspires to become the premier convenience destination in North Dakota, and its founders have the background to make that goal a reality.

“I think we can become a regional player in the c-store industry,” said Scheeler, managing director of The Hub. “We have a great deal of focus on our food programs, and in this region—as opposed to on the East Coast—there isn’t a good perception of food in c-stores. We are going to start by creating a niche in our market area. It’s going to take time to change customer expectations of c-store food, but we believe we can do it fairly quickly and that our customers are going to love it.”

Picture-Perfect Partnership
The concept for The Hub came to fruition in October 2012. Scheeler, who grew up in Dickinson, N.D., had been with Minneapolis-based Bobby & Steve’s Auto World for 15 years, having started as a freshman in college working the cash register part time, then climbing the ranks to director of operations. “I enjoyed my time there and learned a lot, but I also had the itch to start something on my own with my ideas and my ideal business model,” said Scheeler, who sits on the National Association of Convenience Stores (NACS) board of directors. “I figured that the window of opportunity to do that can be relatively small, so I thought it was the right time in my life to go out on my own.”

Scheeler’s mother is a realtor in Dickinson, N.D., and put out word that Scheeler was potentially interested in partnering to start a c-store chain. “The day she did that I received a call from Chris Fitterer who happened to own a large piece of land he wanted to use to develop a convenience store,” Scheeler said. “The trouble was that he and his brothers, who owned the land, didn’t know anything about convenience retailing. We talked and realized very quickly that we were a perfect fit for each other.”

Fitterer, now president of The Hub, and his brothers provided much of the financial backing and the ability to round up additional financial backers, while Scheeler brought a certain expertise in the convenience store business.

Fitterer and Scheeler also found a plethora of synergies in terms of personal values and business goals, as well as the vision they had for their future business model. “It just felt that this was somehow meant to be,” said Scheeler.

Fitterer agreed. “As a fuel jobber, I never really got into the c-store side of the business before, because it wasn’t really my specialty—I know fuel.”

Fitterer said he had an interest in expanding into the c-store business beyond the wholesale fuel side, but knew he’d need a partner with c-store expertise. “The c-store business had changed immensely from when my dad used to run little Amoco gas stations with a single pump. When we found out Jared was available and willing and ready to move back to North Dakota, we were excited,” said Fitterer.

Fitterer and Scheeler agreed early on that they needed to create their own brand from the get go—from logo and design to internal branding of programs. “We essentially want to act from minute one like we are an established company, a chain of many, many stores, because we want to give a high end perception and appearance,” said Scheeler.

Prototype Times Three
Scheeler and Fitterer broke ground on their first location in April 2014, set to open to the public this October.

“Considering that Southwest North Dakota is sparsely populated, we felt we needed flexibility in our model to be able to expand to many different areas,” said Scheeler, who noted the concept includes a c-store version, travel center model and truck stop prototype. The first location, set to open in October in Dickinson is a 7,800-square-foot travel center. “It’s bigger than our c-store model, but smaller than our truck stop prototype,” Scheeler said.

The travel center sits on seven acres, features a large building, and is designed to serve semi-trucks, but does not provide trucker services or on-site overnight parking like the truck stop version will. Meanwhile, the company’s c-store will occupy an acre and a half; feature a proprietary made-to-order food program and a car wash, and all sub-brands that exist in the travel center.

By contrast, the truck stop model would span at least 15 acres of land off the highway, housing a full-service restaurant, trucker services—such as showers, a movie theatre, a chapel, laundry—as well as multiple food options within the same facility. The plan also calls for overnight parking and perhaps a truck wash.

Inside the c-store portion of the travel center, The Hub will offer a Godfather’s Pizza program and a proprietary cold and hot grab-and-go food program branded “The Bite.”
The Bite will feature cold sandwiches, salads, wraps, sides, sliced fresh fruit and vegetables and yogurt parfaits. The hot side will include breakfast sandwiches, lunch sandwiches like hamburgers, cheeseburgers, ham & cheese sandwiches, barbecue rib sandwiches, and fried food options. The roller grill program will also carry the brand.

The Hub also will feature an extensive dispensed beverage category. “We’re going to have many more options than what is typically seen in this area at c-stores. We have a coffee program we branded ‘The Grind,’ which is going to have a variety of options for customization,” Scheeler said.

The operations director noted many successful c-store chains have brought innovation to the industry, so the The Hub is in good company. “I have a great appreciation for what the elite convenience operators in this country are doing and the way they have helped shape the evolution and image of a convenience store, incorporating quality foodservice offerings to elevate the public’s perception of what the c-store industry is all about,” Scheeler said. “I also feel that stores in the upper Midwest are lagging behind. Part of what we want to accomplish is to elevate the public perception of the convenience industry in this area,” Scheeler continued. “To do that we felt we needed to build structures that were upscale, both internally and externally, place a big focus on food, and really make an effort to give quality offerings. By doing so we believe we can quickly change the public’s expectation of what food is like in convenience stores.”

The Hub partnered with Paragon Solutions for the store design, including the branding of all sub sections, including The Grind and The Bite, within the store that play off The Hub concept. “When we teamed with Paragon Solutions to handle our branding and interior design, we asked them to put together a plan that gives us a brand identity that portrays us in an upscale manner and that differentiates us from anybody in this industry in the upper Midwest,” Scheeler said.

The new location will also feature a beer cave, although because a special license is required to sell beer in c-stores in the region, at least at first, the beer cave will be used to feature an array of cold non-alcoholic beverages. “Our goal is to be able to use it as a beer cave in the future and become a beer and liquor retailer,” Scheeler said.

The property will also include a car wash branded under The Hub. “It will be the first self-serve conveyor car wash in Southwest North Dakota,” Scheeler said.

The company will run a program called “The Hub Wash Club” in which customers can purchase an unlimited monthly car wash package. Unitec ReachFree ID will manage the Hub Wash Club. Participants in the program are issued an RFID tag that sticks in the windshield of their vehicle. “When they pull up to the car wash entrance their tag is detected, and the wash is activated. There is no need to come inside to receive a code,” Scheeler said.

The travel center will be branded Mobil. “We felt being a start up as a single store that we could use the assistance of a major fuel brand to pull in customers initially. We’re excited to be working with Mobil, which is a strong brand name in this area, and we believe it’s an essential part of our strategy,” Scheeler said.

Growing Forward
While The Hub’s first priority is getting its first travel center up and running, that hasn’t stopped Scheeler and Fitterer from planning for the future. The company has land west of Dickinson for its first truck stop, which the company hopes to begin constructing in 2015. “We also have one c-store in Dickinson right now, called West Dakota Oil, which will eventually be rebranded under The Hub,” Fitterer said.

Looking deep into the future, the target area for store growth will include North Dakota, South Dakota, Montana and Wyoming, but such expansion is still a long way off. “Right now, we need to get as much saturation as we can in North Dakota in order to build brand recognition and familiarity with our customers,” Scheeler said.
No doubt with such combined executive expertise, solid branding and upscale offerings, The Hub is on its way.