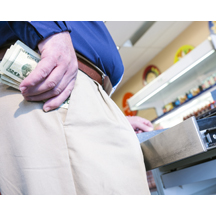 Shrink comes in all shapes and sizes, but knowing how to identify and remedy these occurrences can enable c-stores to turn losses into gains.

When a convenience store is humming along efficiently, the signs are unmistakable: The coffee is fresh and flowing. People are enjoying prompt foodservice offerings. Motorists are lined up at the gas pumps.

However, some adverse facets of a c-store operation aren’t as visible. And unless uncovered quickly, they can undermine profitability. Not the least of which is inventory loss, or shrink.

The National Retail Federation (NRF) earlier this year released figures centering on shrink and the impact on U.S. retailers. Based on research of Richard Hollinger, professor of criminology of the University of Florida, the report found:

•Companies indicated that 18.7% of employee theft involved collusion between internal and external sources.

Often inventory losses can be traced to one or more of the following: employee theft, shoplifting, fraud, vendor theft and accounting errors. Identifying the origin of the loss—whether it’s waste, breakage or theft—can be harder than implementing a solution.

“When you walk into a store and they greet you—we might call that the ‘How can I help you’ index—you’ll know right away how the store is managed,” Moraca said. Other tell-tale signs as to if the store is well managed include cleanliness, well-stocked shelves and that it is operating efficiently. If not, the retailer probably doesn’t have a good handle on shrink issues either, Moraca explained.

Often the solutions to combat inventory loss involve a combination of good management policy, use of technology in store locations and working with staff to keep shrink in check.
Moraca this past June joined the NRF after heading Sunoco Inc.’s security, business continuity and crisis management programs for nearly 15 years.

CONTROLLING THEFT
Controlling external theft like shoplifting requires a commitment to educating your employees on good customer service, awareness to the signs of a potential loss and how to best protect the store and inventory against external loss. This requires the establishment of procedures and training in areas, such as shoplifting prevention, robbery awareness and safety procedures.

One of the most effective tools to prevent shoplifting is good store management and effective store layout. Retailers should also use adequate inventory controls and follow common-sense security practices to combat shoplifting, according to Moraca.

Lastly, he suggested that alleviating shoplifting can be accomplished with a distinct floor layout. “The cash registers and the exit should be synonymous to each other, or in other words, the register should be by the exit, so you want to funnel your customers as they leave, in one little zone,” Moraca said. “And that’s where you certainly want to have your good close-circuit TVs, so you can capture what happens at the register. Most events in a convenience store, robberies, take place within seven feet of the register.”

Internal theft is the largest contributor to loss for most retailers, regardless of size or segment. Studies show across most retail channels, the individuals who steal from a business the most are the employees.

From merchandise theft to collusion with friends or other store employees, inventory losses by employees can easily deplete your profits. The point of sale (POS) brings with it many other forms of employee theft. Simply removing money from the till to elaborate ‘conversion frauds’ that include refund, void or discount thefts, POS theft can cause an operation to lose money and inventory simultaneously through a single incident.

A 2012 study by researchers at Florida State University found that sweethearting—the act of employees providing individuals merchandise, then omitting the sale at the register—costs U.S. companies some $80 billion per year. It also found that two-thirds of service industry employees admitted to having engaged in the practice.

Today, almost all leading c-store operations relies on DVRs and closed captioning to monitor store activities. Not only are such devices helpful, but they can be used to identify mistakes during vendor transactions as well, Moraca said. In addition, more chains are integrating Internet protocol and legacy analog cameras, as well as networks that allow managers to monitor multiple locations off site.

RETHINKING SHRINK
Often considered paperwork errors, inventory processing mistakes can contribute upwards of 15-20% of a retailer’s annual loss, according to NRF data. Moreover, most of the errors seen in retail are employee-caused, thereby making a retailer’s employees perhaps the highest contributor to the business loss every year.

Errors can occur anywhere—from checking in shipments, to ringing on the register to transferring merchandise. These mistakes can include the inaccurate counting of merchandise to the improper discounting or accounting of a sale or tender. Most executives agree that simple mistakes caused over and over again drastically chip away at a store’s profitability.

Mark McKinney, senior vice president of operations for Huck’s Convenience Food Store chain, headquartered in Carmi, Ill., said like most retailers, Huck’s incurs inventory discrepancies, and works routinely to weed them out. One tool is the practice of conducting regular audits, which give Huck’s a snapshot of the health of its 113 store locations in Illinois, Indiana, Kentucky, Missouri and Tennessee.

For example, a shrink audit may require the person conducting the audit to review all signed return receipts of merchandise to uncover trends and patterns that could point to certain shrink patterns. Other audits specifically focus on items that are causing store loss. In both examples, Huck’s relies on operations software that quickly identifies discrepancies in different facets of vendor operations or retail exchanges.

“We do our retail audits 4-6 weeks, that way if you have an issue you can nip it a little quicker than if you go a quarter or six months, so when you lessen that window of opportunity (for shrinkage), you have a chance of stopping it early on,” McKinney said.

Another critical piece of loss prevention is employee training.

Huck’s is among the relatively few that is owned by its employees. Huck’s parent company, Martin & Bayley Inc., launched its Employee Stock Ownership Plan (ESOP) in 2001. Arguably, when it comes to having every worker on the same page, it’s been easier to get buy-in because they have a vested interested in the operational welfare of the company.
“We really try to focus on that portion of it, because when those losses hit, it impacts everybody,” according to McKinney.

5 Tips for Reducing Shrink
1. Find vulnerabilities: Take a look at your store layout as though it were in a heist film and think, “If I were to steal something, how would I do it?”
2. Determine where to concentrate your resources: Your high value items that can be stolen easily should be of more concern for you when merchandising, as well as protecting with security features.
3. Cameras don’t work unless you use them: Installing cameras isn’t enough to deter employees and serial shoplifters. If you notice discrepancies in the register or on the shelves, look at the tape.
4. Signs deter some, not others: Professional thieves aren’t likely to care much about signs (or cameras for that matter). However, employees and amateur shoplifters can be dissuaded if they know they are being watched.
5. Talk to your team: Employees need to be on the same page as their manager when it comes to a loss prevention strategy. Source: retailminded.com