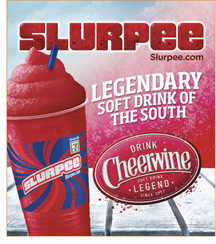 7-Eleven began experimenting with local flavors earlier this year with the introduction of a Vernors Ginger Ale Slurpee drink in its Michigan stores.

Cheerwine, the “legendary soft drink of the South,” has been described as best served bone-chilling cold, which makes it a perfect new flavor for 7-Eleven Inc.’s iconic Slurpee semi-frozen carbonated drink.

Created almost 100 years ago, Cheerwine has its roots in North Carolina, although the rich red carbonated drink has fans across the U.S. and even around the world. Cheerwine-lovers living outside the South seek the soft drink in specialty grocers, vintage soda shops, barbecue joints and other outlets found on www.cheerwinefinder.com, a Website dedicated to connecting fans with their favorite drink.

“Our Carolina stores have carried Cheerwine soda, but locals really love having their favorite Southern soft drink as a Slurpee,” said Nancy Smith, 7-Eleven senior vice president of fresh foods and proprietary beverages. “Some tourists visiting North Carolina try Cheerwine for the first time as a Slurpee and then purchase it in cans or bottles to take home with them.”

7-Eleven began experimenting with local flavors earlier this year with the introduction of a Vernors Ginger Ale Slurpee drink in its Michigan stores, which drew enthusiastic crowds to its stores. Likewise, Cheerwine aficionadas are discovering the Slurpee version of their favorite. Other local Slurpee flavors include Squirt in Los Angeles-area 7-Eleven stores and Big Red in greater San Antonio 7-Eleven outlets.

“Our goal is to get to know our guests and carry not only the products they expect to find at 7-Eleven, but also surprise them with new, unusual and fun items not typically found at a convenience store or anywhere else,” Smith said. “And those can vary depending on the state, city, sometimes even the neighborhood. These niche flavors have proved to be true hometown favorites because they’re what the locals love and crave.”