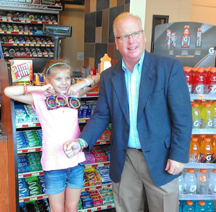 On July 19, 2014, CITGO Marketer Consumers Petroleum and its Wheels Convenience Stores hosted a Customer Appreciation Event and new product launch at the Wheels CITGO at 2729 Tamarack Avenue in Danbury, Conn.

“I came up with the idea for Kandy bandZ for a school project, and my parents helped me figure out how to make it out of safe stuff so that kids could wear them,” said Sperrazza. “Selling my wristbands at the Wheels CITGO is so cool! When I grow up, I want to be a famous scientist.”

Eight-year-old Sperrazza merged her love for fashion and candy to create Kandy bandZ as part of the Connecticut Invention Convention (CIC), the oldest continuously operating children’s invention competition in the U.S. Following the local competition, she was invited to present her invention at the state finals and won a Whole Foods Sponsor Award at the event, hosted at the University of Connecticut.

“CITGO and our network of Marketers and Retailers support local businesses and social investment,” said CITGO Petroleum Corp. Vice President of Government and Public Affairs Rafael Gomez. “By supporting Sperrazza’s invention and incorporating her product into Consumers Petroleum’s Danbury Wheels CITGO offerings, we are maintaining our commitment to helping inspired students and dedicated families succeed in their endeavors.”

Wheels Convenience Stores, CITGO and the Sperrazza family are fueling good to promote education and well being in their community. The Danbury Wheels CITGO, currently the only CITGO location selling Kandy bandZ, sold 68 wristbands during the July event highlighting Sperrazza ‘s achievement. Sperrazza and her mother, Marisa, are currently applying for patents as they grow the business. Kandy bandZ are free of BPA and phalate chemicals commonly found in other plastic products.

“Wheels is a fixture in many of the neighborhoods where we operate and we thrive because the local community continues to come to our stores, so it’s only natural for us to support our loyal customers, too,” said Wheels Convenience Stores Marketing Manager Gina Nero. “Being able to offer the venue for Samantha to sell her wristbands meant a lot to us and to her and her family. It is part of what separates us from the pack as just another convenience store.”