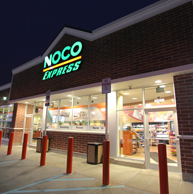 NOCO has announced that Jim DeFilippis has been promoted to general manager of the NOCO Express division.

He most recently served as the director of merchandising and marketing for NOCO Express.

DeFilippis brings nearly 40 years of retail industry experience to his new role at NOCO. Prior to joining the family owned and locally operated company, he served as the director of fresh food for Acosta Sales & Marketing.