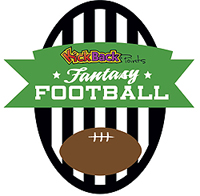 For the second straight year, KickBack cardholders can build their Fantasy Football team with each purchase using their KickBack Points’ card and will compete against other cardholders for a chance to win two tickets to The Big Bowl game in Arizona.

As the Pro Football League prepares to kick off the 2014 Pro season, KickBack Points’ is readying another season of KickBack Fantasy Football with a host of new opportunities to earn prizes and points.

But one lucky grand prize winner will receive a trip of a lifetime. The KickBack Points coalition cardholder with the most Fantasy Football points at the end of the season will wins an all-expenses paid trip for two to The Big Bowl game on Feb. 1, 2015 in Arizona.

Beginning Sept. 4, KickBack cardholders can earn one new fantasy football player every time they use their KickBack Points’ card. The player will be displayed at the bottom of their receipt. A total of nine Pro players can be collected over the course of the season to complete their fantasy team.

KickBack cardholders must enroll their KickBack Points Card in the fantasy football program by visiting www.kickbackpoints.com. The KickBack Website also detailers player performance, official scoring and a weekly leader board.

“Once we launched the KickBack Fantasy Football promotion last year, we knew it was an instant hit with our customers and for our retail partners,” said Patrick Lewis, CEO of KickBack Rewards Systems. “KickBack’s loyalty solutions help retailers make the shopping experience more personal. Customers absolutely love recognition and having a connection with the brands they trust the most.”

Growing the Game for 2014
KickBack’s 2013 Fantasy Football season was an extremely successful one for the company. During the promotion, nearly three million players were given out to customers, plus the number of transactions, frequency of visits to stores, average transactions per day and average redemptions per store all experienced double-digit growth for participating retailers during the life of the promotion.

With such a triumphant first season, KickBack committed to doubling-down on its success by expanding the promotion to help its retailer partners. For example, KickBack has redesigned the point-of-purchase (POP) displays to be more colorful and attractive to draw in-store attention to the contest, the company has committed to giving away five million points free in weekly contests and redesigned the www.kickbackpoints.com Website to ensure a more pleasurable viewing experience for fantasy players.

Also new for the 2014 season will be a Game of 33 weekly side game that will run throughout the season. Each cardholder whose team has a final score of 33 for the week will be awarded 100 KickBack Points.

“When you add all these things together, we are elevating our commitment to our retailers and our cardholders to offer them a fun and exciting promotion that everyone can participate in,” Lewis said.