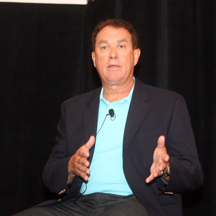 C-store executives explain how a self-distribution model can cut out the middle man, helping your chain cut costs.

Todd Jenney, president and CEO of North Carmi, Ill.-based Huck’s Convenience Stores, remembered that the company’s first warehouse operation ran from the back of Huck’s first store. Now with a 93,000-square-foot building equipped to handle dry, cold and frozen goods that is distributed to the company’s 115 stores, Huck’s Jenny ranks among the growing number of convenience store operations that rely on self-distribution to better manage their operating costs and control quality of their product.

One of three panelists at the 2014 National Advisory Group (NAG) Conference, hosted by Convenience Store Decisions, Jenney explained to listeners that Huck’s is equipped to make delivery to its all of its stores twice per week, despite the fact that its sites are located throughout Illinois, Indiana, Kentucky, Missouri and Tennessee.

“It’s so important to be in the self-distribution business,” said Jenney, who told listeners that Huck’s has been able to convert its warehouse into a stand-alone profit center by bringing distribution in-house, and streamlining processes to wring more savings.

Also manning the conference panel, Gus Olympidis, president and CEO of Family Express, based in Valparaiso, Ind., has been a long -time proponent of self-distribution, which begins at the company’s 165,000-square-foot headquarters, warehouse, bakery and training center in Valparaiso. The site is also central point of distribution for its 60-plus locations, which is also instrumental in maintain the company’s foodservice program, including 16,000 donuts made and distributed daily.

Having more control over direct store delivery (DSD) is important has been an important tool in dealing with uncertain vendor costs, Olympidis said. However, not all distribution models are the same, and such a capital investment has to be feasible when it comes to geographic dispersion, which is the plan Family Express has followed since building its first warehouse.

“We can facilitate distance, as long as there is a cluster (of stores) at the end of that distance,” Olympidis said.

All of these fresh products require a dependable distribution system, which includes its newest, 45,000-square-foot warehouse that helps the company maintain $2 million in inventory at any given day.