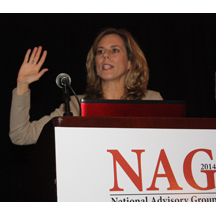 NAG Conference hears analyst speculation about the future of these key categories.

Today, fuel comprises 80% of sales but only 35% of contribution margin for c-stores on average, spurring many to look for new opportunities inside the box. Inside sales are being driven by cigarettes, foodservice and packaged beverage. And Herzog pointed out that first quartile retailers are performing almost three times as well as fourth quartile retailers on gross profit dollars per store for packaged beverages.

U.S. Beverage Trends
Consumers are shifting their preferences away from carbonated soft drinks (CSDs) and looking to non-carbonated beverages, which consequently are stealing share of the category away from CSDs.

CSD volume overall is down -15.5% since 2003 as bottled water and energy have expanded. Meanwhile, non-carbonated beverages have grown 7% CAGR and nearly doubled volume share since 2003 while CSDs have declined on average -2% per year, Herzog noted.

Bottle water volume has driven the majority of incremental growth in beverage volume. But the segment has the lowest average price per case. Energy meanwhile is both a volume and value growth driver. It offers the largest growth in incremental sales and is now the No 2 non-carbonated beverage.

Even as CSDs are losing volume, they still represent a large part of the beverage category. “You have to be there (in CSDs), it still drives traffic but some of these sales are being allocated to other beverage categories,” Herzog said.

Tobacco Trends
Competition in tobacco continues to grow. Family Dollar entered the cigarette category in 2012, and Dollar General followed. Meanwhile, vape shops are a growing trend to monitor, but future FDA regulation on that front remains to be seen.

Vapor is expected to flourish, although the majority of retailers don’t expect it to impact cigarette pricing just yet, although they do believe gross margins on cigarettes will continue to decline.

C-stores continue to lead other channels in e-cig distribution, but the growth rate for electronic cigarettes has slowed. The vapor market size is $2.5 billion in the U.S., while the E-Cig market is $1.4 Billion. E-cig momentum moderating annual growth is estimated to be about 15%.

According to Lorillard, 47% of adults have tried e-cigs. But the emerging vapors/tanks/mods (VTM) could be marginalizing the “cig-alike” e-cigs, butincrementally growing the overall vapor category. Still, “e-cigs are three-times more profitable to retailers than combustible cigarettes,” noted Herzog.

“Technology must continue to improve, but I think it can improve and will improve. Consumers might start with e-cig or just jump into VTM and then go back and forth as technology improves,” Herzog said.

VTM is expected to further penetrate c-stores in next six months, and retailers are expected to shift space in the tobacco category to accommodate them. Herzog noted 100% of c-store retailers now plan to carry e-cigs and VTMs.

But vape shops are impacting sales according to 46% of retailers, while 21% expect a negative impact in the future from vape shops. “We expect retailers to continue to embrace vapor,” Herzog said.

Significant dual usage continues to exist between cigarettes and e-cigarettes due to health concerns and the ease of using e-cigs in public places. “We expect growth of the combined profit pool for e-cigs and combustible cigs will increase 6.6% in the next decade (above the 4-5% historical growth for cigs.),” Herzog noted.