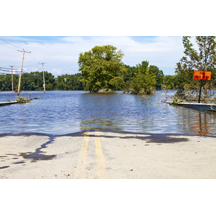 Hindsight is 20/20 as the saying goes, but foresight is key in protecting your business during storm season.

Just ask convenience store retailers on the East Coast. When Hurricane Sandy came barreling down on the East Coast two years ago, it cost retailers an estimated $4 billion in sales—according to U.S. News & World Report—and that doesn’t even begin to take into account expenses due to property damage.

When a storm or other disaster hits, having a plan in place—one that employees have drilled—can save costs not to mention lives.

The state of Florida is a veteran when it comes to weathering hurricanes. FPMA works with local governments on the issue of storm preparedness, attending a planning meeting in late spring to be ready to act should one hit, and then relaying information back to its members.

“If a hurricane were to hit, someone from our association—myself or someone else—would head to the hurricane center that tracks the storm and get information to our members,” Bowman said.

When a storm hits Florida, fuel supply is especially vulnerable.

“We are a peninsula and 97% of the cargo that comes into Florida is all coming in on ships. Not to mention as tanker trucks head to deliver gas, they are often held up in the traffic caused by evacuations,” Bowman said.

So what’s a retailer to do?

That’s why many retailers in disaster-prone areas run training sessions each year—usually in the spring— to make sure store employees know how to shutter the building, from turning off equipment and depositing money to wrapping gas pumps, setting alarms and shuttering doors.

A trial run can ensure everyone knows what to do should a storm hit, allowing employees to close quickly and get home to their families. When dealing with a disaster scenario like a hurricane, which can shift direction and strength inside of a minute, such advanced planning can make a gigantic difference. For example, managers should relocate outdoor garbage cans and other materials not bolted to the ground to the inside before shuttering doors and windows. This simple act prevents those flying objects from doing major damage once winds pick up.

Some retailers also collect phone numbers and information on where employees plan to be—whether they’re evacuating or staying with relatives—so they can alert their staff once the danger has passed and the store is reopening, while ensuring everyone’s safety.

Once the storm has left the area, the first priority is to get generators up and running and allow fuel deliveries into the area.

EMERGENCY SERVICE
Many miles from Florida, Lassus Handy Dandy convenience stores, which include more than 20 locations in Indiana and Ohio, might not be facing any hurricanes in the near future, but it still sees its share of storms and power outages. To prepare, the company installed a backup generator this summer at the Lassus Handy Dandy on Coldwater Road in Fort Worth, Ind.

The backup generator will aid emergency vehicles, such as police cars and fire trucks, that might need additional backup gas pump options. The company decided to add the generator because it has a contract with the city to provide fuel to municipal vehicles and it wanted to ensure that the city had access to gasoline even during emergencies and power outages. The company selected a commercial-grade Generac generator, and has plans to install more at other locations.

Having power during outages and emergencies is an important service that aids citizens who need gasoline, food and water, working bathrooms and other resources during disasters. And residents are sure to remember the business that was there for them once the weather clears.

ALTERNATE POWER
In Florida, businesses on the evacuation route are required by law to offer backup generators, but for most convenience stores in other parts of Florida and across the U.S., it’s a business decision they have to make, weighing the cost of the generator against the cost of spoiled food and lost business days due to lack of power. While generators can be costly upfront, they can also pay for themselves by allowing businesses to reopen quickly, keep gas pumps flowing and prevent merchandise from spoiling.

Businesses considering generators have two options. The first is an automatic generator, which kicks on within seconds of losing power. While it’s the more expensive of the two options, it doesn’t require manual intervention to turn on, and the quick reaction time can save the items in a c-store refrigerator case and prevent power outages from impacting your business.

In a major water surge, however, even an automatic generator can be impacted. The other option is a towable generator, which can be purchased or rented. Retailers who own towable generators and have several stores often find this gives them the option of moving the device to the store that needs it most.

But towable generators can also get held up in traffic, an issue that can be even more problematic when renting a generator from afar, as it might not arrive in time to prevent food spoilage if roads are closed or clogged with traffic.

Still, in the event of a major storm, power can remain out for days, and many consider being open and ready for business once the storm passes to be a necessary community service, not to mention key to maintaining a profitable business.

ARE YOU PREPARED?
Even if your business has a storm plan in place, Cintas Corp. recently released a list of six storm preparation questions every retailer should ask to ensure it’s ready to stand up in the event of a disaster.
1. Do storefront windows have protective coating or shutters? If not, what are the board-up plans? Cintas noted providers of these services will be overloaded during evacuation periods, so have a partner in place before you need one.
2. When was your emergency plan last updated? Even if it was created six months ago, review it now to make sure it’s up to date. Be certain the repair providers you plan to team with are still in business and capable of performing the potential work called for in your plan.
3. What work scopes have been prepared for common emergency repairs after the storm passes? Work with your emergency repair provider ahead of time to identify what your potential repair needs might be should a storm hit, and develop work scopes to help expedite the repair process after the storm passes, Cintas advised.
4. Are first-aid supplies regularly stocked? Not all storms result in store closures and evacuations, meaning it’s important to also be prepared for smaller emergencies and unexpected damage, including minor injuries.
5. When were emergency (e-gress) lights last tested? Cintas noted most retailers don’t know the National Fire Prevention Association 101 regulation that requires businesses test emergency exit lights annually. This is to ensure that lights will maintain a 90-minute period of illumination during electrical outages or emergency situations. Make sure e-light testing is included in your emergency plans.
6. Who is my emergency repair provider? Identify an emergency repair provider who can provide around the clock board-up services and sandbag placement in preparation for the storm and assist with cleanup and repair tasks afterward. Also, stores should keep the contact’s number readily accessible. CSD