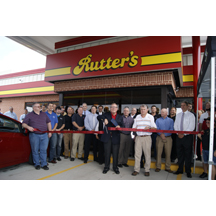 One of the largest of the chain’s 60 stores, the new location measures 6,280-square-feet.

Rutter’s marked the opening of its 60th store in Middletown with a ribbon-cutting ceremony and donations to three local charities.

Rutter’s donated $1,000 to both The Middletown Area Blue and Gold Club and the Lower Dauphin High School Falcon Foundation, which provide funding for worthwhile programs and ideas that cannot be implemented within their respective districts due to limited funds.

In addition, the Londonderry Township Volunteer Fire Company received a $1,000 donation to continue their lifesaving efforts in the area.

One of the largest of the chain’s 60 stores, the 6,280-square-foot site is located at 2800 Vine St. in Middletown. The new site is open 24 hours a day, seven days a week and includes 12 fueling spaces and four high-speed truck diesel fueling spaces. Each customer who swipes a Rutter’s Rewards card at the pump will save three cents per gallon every day. Rewards customers can also earn more cents, up to the price of a gallon of gas, by scanning their Rewards card while making qualified purchases on more than 1,800 items inside the store.