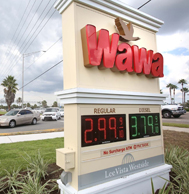 The celebration will include fanfare, a special fuel-focused customer giveaway, a charitable hoagie building competition between members of the Frederick County Sheriff’s Department and the Westview Fire Co. and free coffee for the first 10 days the store is open.

To mark the grand opening of its first Maryland store opening in 2014 and the milestone 400th fuel store, the first 400 fuel customers will receive a $10 Wawa gift card starting at 8 a.m.

On Friday, Sept. 5, at 10 a.m. the grand opening celebration will officially begin. The festivities will include Wawa and local officials; members of the Frederick County Sheriff’s Department and the Westview Fire Co.; Wawa Director of Store Operations Kathy Monzo; Wawa Area Manager Staci Coulbourn; Wawa General Manager Kate Bockius; Wawa associates and customers; and Wawa’s mascot, Wally Goose, who will all join together for a ribbon cutting and ceremony celebrating the many ways Wawa seeks to fulfill lives every day.

“In 2014, we made a vow to expand the Wawa experience to more customers than ever before, and today we’re taking that commitment to the next level, not only with our new Frederick store, but with our 400th fuel location,” said Chris Gheysens, Wawa’s president and CEO. “When we opened our first fuel location, it was because we wanted to provide our customers with the best fuel quality and prices possible – so that they could fuel up fairly every time. And today, we’re continuing that same commitment and striving to not only serve, but fulfill our customers’ lives every day right here in Frederick.”

Fueling Success
The grand opening of this new store marks its 400th fuel location across six states— Pennsylvania, New Jersey, Delaware, Maryland Virginia and Florida. While Wawa is now known for its fuel offer, it is a fairly recent addition to the company’s history.

Wawa began in 1803 as an iron factory in New Jersey. In 1902, Wawa became a dairy, and in 1964 the first Wawa store was opened. Since opening its first store, Wawa has maintained its pledge of Fulfilling Lives Every Day.

In 1996, Wawa opened its first fuel store in Millsboro, Del. Today, customers have come to rely on Wawa to provide everything from fuel for their vehicles, to fuel for their bodies, to the fuel that creates lasting relationships between customers and associates.

Today Wawa operates more than 650 stores across a six state region, 400 of which offer fuel (250 offer diesel). With the addition of fuel to our stores more than 15 years ago, the stores became larger, offered more parking, and above all, added more convenience to the lives of our customers who embraced this addition to our offer immediately.

Hoagies for Heroes Competition
The grand opening event will conclude with a Hoagies for Heroes, hoagie building competition, as the Frederick County Sheriff’s Department and the Westview Fire Co. face off in a battle of bravery, skill, and sandwichmaking expertise. Each team will be challenged to see who can build the most hoagies in three minutes in the traditional Wawa way. Wawa will conclude the “Hoagies for Heroes” competition by presenting checks on behalf of the winning and runner-up teams, for $1,000 to the charities of their choice.

Kate Bockius will serve as general manager of the store, leading a team of nearly 60 associates, all new positions brought to the area through the development of the store. Associates in these full- and part-time positions will not only receive competitive salaries and health benefits, but will have the opportunity to be enrolled in Wawa’s employee stock ownership plan. The new Wawa store will offer customers numerous Wawa brands, such as the award-winning Wawa coffee (195 million cups sold annually); the Sizzliä, Wawa’s hot breakfast sandwich; Wawa’s new line of specialty beverages (hot, cold, iced and frozen); Wawa Bakery; Wawa’s built-to-order hoagies (80 million sold annually); and Wawa’s beverage line of dairy products, juices and teas.

“2014 is a milestone year for us at Wawa as we open 45 new stores—including our 400th fuel store—celebrate our 50th anniversary in retail, and extend our commitment to fulfilling lives in more ways than ever before,” said Gheysens. “As we celebrate the grand opening of our Frederick store, we celebrate our Frederick family, as well as our great associates that build lasting relationships with people and communities on deeper levels.”

Commitment to Fulfilling Lives
Wawa believes that it has a role in making the world a better place. For Wawa associates, that doesn’t mean simply filling customer orders—it means fulfilling the lives that they touch every day. Beginning with its first store, Wawa has worked its way into the hearts, minds and fabric of people’s lives. Wawa does it around the clock, in 3 ½ minute doses, every day- 24/7, 365 days a year. Wawa is so committed to this concept, it has made fulfilling lives its ultimate purpose and goal—every day.

In 2014, Wawa is extending its commitment to fulfilling lives every day through several groundbreaking initiatives and announcements including: the launch of The Wawa Foundation to formalize and increase its support of charities and community programs; the celebration of its 50th anniversary in the convenience industry; the release of its first book authored by former President & CEO Howard Stoeckel entitled, The Wawa Way: How a funny name and six core values revolutionized convenience; and through the opening of 45 new Wawa stores dedicated to enhancing Wawa’s presence in the markets it serves and bringing the Wawa experience to more people.