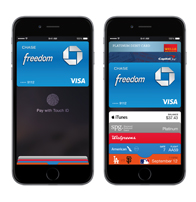 While much of the attention at this week’s Apple press conference was on the iPhone 6 and the company’s new smartwatch, we believe—along with many industry analysts—that the most important news of the splashy event was Apple Pay, the company’s new mobile payments system.

When a giant like Apple decides to revolutionize the way we do things (in any sector), one thing is for certain: change is inevitable. Using near field communication (NFC) technology, the new iPhone 6 and Apple Watch will be able to interact with payment terminals with a simple tap. While much of the technology is not new, Apple’s unique ability to make existing technology and processes easier and more effective is sure to ignite consumers’ interest in mobile payments and speed up adoption.

As advisors to companies that take, process or issue credit cards, including merchants, payment processors and banks, focused on helping them lower costs, increase security and add profits, our phones began ringing after Apple’s conference. In the article below, we’ve provided answers to many of the questions we received in response to Apple’s game-changing move.

Does it require a hardware upgrade?
To accept payments from Apple’s NFC-equipped mobile devices, most merchants will need to upgrade their payment terminals with a hardware add-on to support NFC. As merchants already must upgrade their terminals to support the chip-and-PIN system (also known as the Europay, MasterCard and Visa, or EMV, standard) to meet the October 2015 deadline set by the payments industry, many may now consider looking at systems that incorporate both technologies.

In addition, merchants must consider where the equipment is placed, as consumers will need to wave their phone and tap it against the reader. And, as with any new technology rollout, staff training will be critical to realizing a proper return on investment.

Is it secure?
Apple has done everything in its power to make Apple Pay secure. Instead of storing credit card numbers on the device or Apple servers, a unique “Device Account Number” is assigned, encrypted and stored in what Apple is calling a “Secure Element” on the iPhone or Apple Watch. According to Apple: “Each transaction is authorized with a one-time unique number using your Device Account Number and instead of using the security code from the back of your card, Apple Pay creates a dynamic security code to securely validate each transaction.”

Should I accept Apple Pay?
Your decision to accept Apple Pay should encompass a variety of considerations, from your current technology, the type of customers you presently serve and those you wish to attract, to your desire to be seen at the cutting edge of the retail experience, including payments. However, Apple’s timing is no coincidence. With the EMV compliance deadline of October 2015, merchants are already in the process of reevaluating their payment technologies. As with any change, merchants should use the opportunity to evaluate their entire payments strategy—including partners and fees—to ensure the most beneficial contract terms.