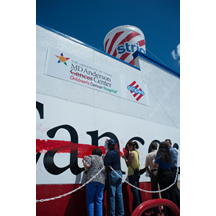 Each community was invited to paint a red line (strike) through the word cancer emblazoned outside of designated Stripes locations.  Customers, elected officials (city, county, state and federal) and Stripes employees were able to write tributes and words of encouragement to honor their loved ones during the kick-off events.