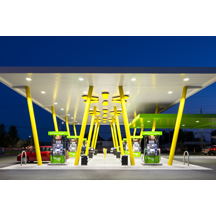 Walmart’s prototype convenience store in Bentonville, Ark. reflects a shift  in strategy for the retailer, but will it be a game changer for the industry?

As vehicles navigate under the shiny white fuel station canopy, the eye goes immediately to the yellow columns designed to mimic the burst of petals in the Walmart spark and the “W” in its iconic name.

On closer inspection, three noticeable sparks affixed on the underside of the fuel canopy double as branding and lighting.
A green walkway canopy, lower in height than the fuel canopy, extends from the brick building like a box lid. On the other side of the store’s entrance, barbecue sandwiches are being prepared at a deli counter.

Inside and out, the convenience store site, located just a short walk from the headquarters of Wal-Mart Stores Inc., is crisp and functional—almost understated for the import it carries, according to some industry experts. The pilot Walmart To Go not only reflects the industry titan’s evolving assessment of the superstore, but the changing tastes of the American shopper.

As consumer habits evolve, big box retailers are reinvesting in smaller stores, means of greater productivity and an online presence, helping them to compete more effectively against e-commerce entities like Amazon that threaten to swallow up brick-and-mortar stores one byte at a time.

Earning its reputation in the big-box domain, Walmart’s interest in the c-store industry is one of necessity. The retail giant launched the test c-store this past March with an eye on a different segment of the shopping public. Though it tried penetrating the convenience market years ago with limited success, Walmart is again targeting commuting patrons whose habits relate more to filling up the gas tank and grabbing a sandwich than those customers who load the station wagon with bags of groceries for the month.

Test Case
Not surprisingly, Walmart is taking a methodical approach to the venture in Bentonville, Ark. It’s closely looking at product mixes and examining customer patterns, and store merchandise changes in type and quantity in short order as company representatives analyze the numbers in detail.

“I go in there every week, and it seems to change from week to week,” said Walmart spokeswoman Betsy Harden, who added that the 5,000-square-foot c-store offers about 3,200 items, contracting and adding SKUs in response to sales. For example, wine sales weren’t doing wonderfully, so the retailer altered the space for other merchandise. However, real grapes do great, so more were added.

“We’re trying to be as selectable as possible and listen to what customers are saying, and then use that feedback. We will adapt and learn and get new things in there,” Harden told Convenience Store Decisions in a wide-ranging interview on the company’s desire to boost its convenience offering.

Fresh is the concept Walmart is pushing: the product mix as in fresh produce, fresh grab-and-go sandwiches, wraps and blended coffees.

However, don’t confuse the pilot c-store with another Walmart To Go program of the same name. Though this model with the same label is also small in scale, shoppers can order fresh, dry and frozen groceries on walmart.com, as well as thousands of general merchandise items, including electronics and toys.

The retailer began testing the pick-up version of Walmart To Go in 2011 in San Jose, Calif. and San Francisco, and expanded the program to Denver in October 2013.

The c-store in Arkansas is more homegrown, right down to the local foods cooked and served by Bentonville Butcher & Deli, a local favorite.

Stay tuned to CSD‘s October issue for more on Walmart’s plans with Walmart To Go and Neighborhood Market.