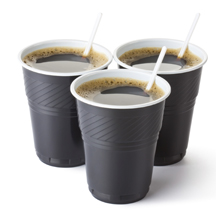 A quality coffee program and an array of condiments can differentiate your brew offering from the rest of the pack.

Last year, 7.8 billion cups of coffee were served by commercial restaurants, the vast majority through fast-food channels, according to NPD Group market research firm. Of those cups, 4.7 billion were regular-brewed coffee, including decaf and flavors, while the rest were filled by specialty coffees.

That growth, she noted, goes beyond the morning’s peak coffee consumption hours and continues through the 2p.m.-4 p.m. snacking time. NPD found that one billion cups of coffee were served as an afternoon snack and that 730 million of them were served at convenience stores.

“This presents a major opportunity for convenience store operators to boost their coffee servings throughout the day,” Rigg said.

But there is about to be a big change in the company’s coffee program. While the beans and brewing methods will remain the same, the Lava Java name will be gone by the end of the year to be replaced with the name of the company’s bakery concept, Delicious DeDe’s.

The name DeDe’s has a strong association with freshness and quality, so Friendly Express management decided to leverage that reputation and tie the coffee in with it, said Ken Johnson, the company’s director of marketing. Trade dress, including signage and packaging, also actuate the bakery’s offerings. The company already pairs up DeDe’s doughnuts with its coffee for bundle deals.

“The doughnuts help to sell the coffee and vice versa,” Johnson said.

Friendly Express offers four coffee varieties at each of its c-store locations. A popular option is called “Wired,” which contains 50% more caffeine than the house blend. Wired is highly charged in another way because it accounts for one-third of the stores’ total coffee sales.

Instead of rotating flavors of coffee, Friendly Express rotates the syrups that customers can use to spice up their brews. Eight different flavor shots are available at any given time.

“There are at least 100 different syrups available so we can really give our customers plenty of variety,” Johnson said. “They like using the syrups and for us it’s easier than buying and brewing different flavors of coffee. We’re also not stuck with a case of a flavored coffee that doesn’t sell well.”

In addition to their regular coffees, the stores offer 4-6 different types of cappuccino. Friendly Express has a full-service espresso bar in one of its stores in a predominantly Latino area. Johnson said the coffee drinks sell well all day at that store.

To promote its coffee offerings, Friendly Express has a loyalty club it calls Express Points. For every six cups customers purchase, they get a seventh cup free. The program is now going on its fourth year. Friendly Express also offers a refill program, selling a 16-ounce mug for $6.99 and a 24-ounce mug for $7.99, with refills for 99 cents.

Because the company’s bakery has outgrown its current facility, Friendly Express is in the process of building a new, larger bakery. In addition to the bakery and retail store, this building will also house a full-service café.

“We’ll have baristas and a full menu of hot and iced coffee drinks in the café,” Johnson said. “We bought a unit that grinds the coffee, tamps it and brews it so the drinks are very simple to make.”

The café will also have drive-through service. Johnson explained that the company might roll out the café concept in some of its other stores.

“The returns on high-end drinks are amazing,” Johnson said.

WINNING WITH OPTIONS
At Crosby’s Stores in western New York and northwest Pennsylvania, Crosby’s Corner Café Coffeehouse is the hot beverage component of the chain’s proprietary foodservice program. In the morning, the stores open up with 6-8 varieties of coffee. Around noon, they will start pairing down until in the evening there are only two or three varieties available, said Doug Galli, vice president and general manager of the 49-unit, Brockport, N.Y.-based chain.

While hazelnut or amaretto may be one of the day’s featured brews, mostly the stores rotate varietals like Dark Guatemalan instead of flavored coffees to give their customers different options. In addition, they offer four flavors of cappuccino, three standard and one that rotates.

“Once a quarter we ask our customers on Facebook to choose the varietal we will feature for a limited time,” Galli said. “We do the same thing with our cappuccinos.”

Not having a drive-through is also a drawback because many competitors do.

“We try to differentiate ourselves by offering a great cup of coffee–made from 100% Arabica beans from a local roaster—at a slightly lower price than Starbucks and on par with our other competitors, and offering more flavors and condiment options than they do,” Galli said. “We also have a coffee loyalty punch card.

Crosby’s is also revamping its breakfast program to strengthen the draw of foodservice to its stores. Galli sees bundling with breakfast sandwiches and other items as a key to boosting coffee sales. He expects to have the new program in place by sometime in the early fall.

“Out of 50 customers, there will be at least 35 different ways that they like their coffee,” Chiovera said. “For most people, the best cup of coffee is the one they make for themselves, and it presents the best opportunity for convenience stores to increase their sales.”

It’s just as important to have enough space at the bar to make all of the condiments accessible and allow customers to prepare their coffee.

“It requires committing more lineal square footage to the category so that at 7:30 in the morning you don’t have four people climbing all over each other trying to find a place to put down their cups,” Chiovera explained. “If that happens, they won’t come back.”

The ultimate in customization is the single-serve—best known as K Cup—brewers like the ones available from Keurig.
Chiovera said this single-cup technology could be the next big thing for convenience stores. Subway is already using it in their stores.

4 Tips For Boosting Coffee Sales:
• Promote frozen specialty coffees as an afternoon snack.
• Differentiate yourself from competitors with variety.
• Rotate syrups rather than flavored coffees for more variety and less waste.
• Give customers space to prepare their coffee.