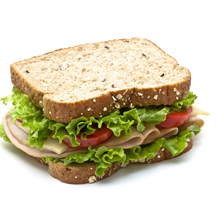 By emphasizing quality, variety and convenience, retailers have the opportunity to convince consumers to purchase more sandwiches rather than making them at home.

When the quick-service provider Pret A Manger first introduced prepackaged sandwiches in its stores 10 years ago, the first thing the company had to do was communicate a message of freshness and quality to its customers, said Arlene Spiegel, founder and president of New York-based Arlene Spiegel & Associates, retail and foodservice consultants.

“It was a hurdle that Pret A Manger had to get over to convince customers that prepackaged sandwiches could be fresh and wholesome,” Spiegel said. “They made sure that their packaging clearly showed the product and they promoted the quality of ingredients by using words such as ‘handcrafted,’ ‘fresh, natural ingredients’ and ‘made fresh throughout the day.’”

“Many consumers feel that if they can’t see the sandwich, they can’t trust it,” Spiegel said. “Even if you are using an environmentally-friendly cardboard box, there should be a window that gives a clear view of the sandwich. There is a lot of great packaging out there to allow you to really showcase your sandwiches.”

Within the 30 convenience stores operated by Tri-State Petroleum, how the sandwich looks is most important, said Frank White, the company’s director of retail operations. Sub sandwiches are delivered multiple times during the week to locations in Pennsylvania, Ohio and West Virginia, and the packages are coded for freshness so consumers know when they were made.

Love’s Country Stores & Travel Stops Inc., which has more than 320 locations in 39 states, puts the promise of quality and freshness front and center with descriptive names like “Deli Select” and “Market Fresh,” said company spokesperson Kealey Dorian. In addition, the company states on the package that the sandwiches have never been frozen.

Sampling is also a good way to demonstrate freshness.

“If you bake your own ciabatta or other bread in the stores, let people know that and let them taste how good and fresh it is,” Spiegel said.

BUNS TO BRIOCHE
When Datassential research company asked 1,000 consumers to finish the sentence: “A truly great sandwich starts with having truly great…” Forty-two percent said the bread. One variety that has been showing up on a growing number of restaurant menus is pretzel bread. It grew 33% on sandwich menus over the past year. Another is brioche and many restaurants are simply using the term “artisan” to add upscale appeal to their breads.

Variety and limited time offers (LTOs) also drive interest in the category, White said. Tri-State’s stores carry 10-12 sandwich SKUs and sometimes more when they feature LTO varieties. He agreed that the pretzel bun “is on fire right now.” One of the most popular sandwiches at the stores right now is the ham and cheese on a pretzel bun.

Instances of spicy buffalo appearing on menus rose 34% from last year, and jalapeños 19%, according to Datassential. Chipotle ranch increased its appearance on menus by 31%.

“What we’re seeing is that consumers, especially Millennials, are looking for different bold and even exotic flavors, such as Mediterranean, Indian, Korean, Japanese and Mexican,” Spiegel said. “Cosi, for example, now offers an Indian tandoori chicken sandwich.”

White pointed to a new Tuscan chicken salad sandwich as a good seller at Tri-State’s stores.

International influences could also be seen in Datassential’s menu findings. Ingredients, such as yogurt, curry chicken, tahini, tzatsiki and chutney, are appearing on a growing number of restaurant menus. Datassential also indicated 41% of consumers said they were interested in ethnic sandwiches, such as the Vietnamese sandwich banh mi, Mexican tortas and cemitas, and Cuban sandwiches.

HEALTHY SIGNALS
An increasing number of consumers want healthy sandwich options. In a recent Technomic survey, 51% of respondents said they place high importance on health at lunch (53% for dinner). Forty-three percent said they are satisfied with the healthfulness of sandwiches served away from home.

The number of gluten-free references in restaurant menu sandwich descriptions has increased 51% from last year, according to Datassential. Comparably, mentions of vegan have risen by 41%.

“The word ‘healthy’ has been overused,” Spiegel said. “There are other ways to tell consumers that you offer healthful products.”
Showing is better than telling, so what you put with the sandwiches can communicate healthfulness as effectively as what you put in them, said Spiegel. She suggested merchandising the sandwiches with salads, healthier chip options and functional drinks, such as coconut water and kombucha—a lightly effervescent fermented sweet tea.

Half of the respondents in the Technomic study said they would like to see more healthy sides to pair with sandwiches. Love’s, for example, displays fresh cut fruit in the coolers with its sandwiches. At Tri-State’s stores, sandwiches share a cooler with packaged fruit and vegetable items, along with “upscale, new, better-for-you” beverages,” said White.

Portion control is also important among consumers. Thirty-five percent of those polled told Technomic they would like to see more restaurants offer mini-sandwiches. That’s an increase of nine percentage points higher than the 26% who responded similarly in 2010.

Love’s displays its grab-and-go sandwiches in open air coolers. In newer stores, the display is positioned close to the beverage cooler. At Tri-State’s stores, sandwiches are merchandised in Visi Coolers near the front counters or beverage bars.

Results from the Datassential survey underscored the importance of having a variety of sandwiches available from early morning through evening. Twenty-seven percent of respondents chose a sandwich that was not a traditional breakfast sandwich during the breakfast daypart.

A quarter of the consumers considered sandwiches to be a late-night snack option. Customers also often want to pick up their lunch or snack sandwiches when they come in for their morning coffee and breakfast.

“Time is the most important commodity for today’s busy consumers,” Spiegel said.

One of Spiegel’s clients puts out a selection of about six different non-breakfast sandwiches first thing in the morning. As the morning progresses to lunchtime, he puts out additional sandwich varieties.

“The lines between when people eat and what they eat during those times have become muddy,” Spiegel said. “It’s not so much breakfast, lunch and dinner, but rather ‘gee I’m hungry, what do I want to eat.’”