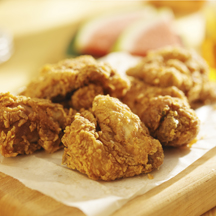 Jack Flash did not have a chicken offering in any of its stores until 2012, when it purchased a convenience store that had a Champs Chicken program in place. Sales were okay, but the former owner did not put much effort into running it.

“The product selection and hours the chicken was available were very limited,” Herrmann said.
Management at Jack Flash saw a lot of potential in the program, so when the company tore down the store, rebuilt it and revamped its operations, including foodservice, last year, it kept the Champs program.

“We thought the product was of such a high quality and the program was so easy to run that we were confident we could really make something of it,” Herrmann explained. “All of the chicken for the Champs program is breaded, battered and fried in-store, so customers know they are getting the freshest product.”

Since the reopening of the Arthur store, chicken sales have consistently increased. Jack Flash plans to put the Champ’s program in its new St. Joseph, Ill. store, scheduled to open in early November. The company also plans to retrofit two existing stores, so it can offer the program, and when it opens two more stores next year, one will offer Champs Chicken.

The wave that Jack Flash is riding reflects the purchasing habits of most consumers as chicken sales continue to grow, according to recent research.

In the National Chicken Council survey, consumers said they ate chicken an average of six times during the two-week period prior to the survey, compared to a little more than five times during a like period in 2012. Also, Millennial respondents (ages 18-34) are the most likely to eat chicken meals or snacks frequently.

In addition, 24% of consumers said they intend to increase their chicken consumption over the next 12 months. One in five said they are likely to buy more chicken at restaurants and other foodservice establishments.

FRONT AND CENTER
One major change Jack Flash made in the Arthur store was to relocate the chicken hot display case.

“Originally, we had our foodservice off to the side, separate from the registers, so customers would have to go to the foodservice counter, order their food, then go to the front cash register to pay. That meant standing in two lines to get food,” Herrmann said. “Our lunch hour is crazy busy, so that became a real problem.”

To alleviate the problem, the company moved the chicken service so it is now next to the cash register. During busy times, a store associate mans the case to expedite orders and keep things moving quickly. Store associates make sure that the case is filled with fresh product all day. Herrmann noted that since moving the case nearer to the registers, he is seeing more impulse purchasing of chicken tenders, dippers, bites and gizzards and livers even beyond the lunch rush.

“Customers see the chicken and they can’t resist it,” Herrmann said. “These products are also easy to take out and eat on the road.”

Jack Flash hopes to even further increase its chicken sales, especially bone-in family and value meals, when it launches a campaign of newspaper ads and direct mail.

“We want to boost our evening and weekend business,” Herrmann said. “So far, we’ve been running on word of mouth and we think, with the right promotion, we can build the business during those times. We think we can sell much more of the eight- and 12-piece family meals after church on Sundays.”

GRAB-AND-GO CONVENIENCE
For the more than 300 convenience stores it serves throughout the country, Gainesville, Ga.-based Mansfield Oil recommends including the Chester’s chicken program in their foodservice mix.

“Chester’s has been a real hit for our convenience store partners. Over the past five years the company has been our preferred vendor in this category,” said Ted Roccagli, retail marketing manager/business coach for Mansfield Oil. “The products sell well at breakfast with the chicken biscuit and lunch with the two- to four-piece combo meals that include a new fresh side, biscuit and drink.”

Chester’s recently introduced a selection of ready-to-go side dishes, including baked beans, mashed potatoes and gravy, cole slaw, green beans and macaroni and cheese, which leads to more sales throughout the day and encourages customers to turn their snack into a meal.

“Most every distributor carries the Chester’s products,” Roccagli said.

Most popular at Mansfield’s partner stores is the three-piece tender combo, which comes with sauce, a fresh side, a biscuit and a drink. The number two favorite is the two-piece bone-in combo, followed by wings.

Catering is a hot button right now and Chester’s is putting a lot of emphasis on it, working with its partner stores to reach out to local businesses and schools. The majority of the catering orders are for tenders, with wings coming in second.

“Catering is a great and easy way to grow the cash register ring,” Roccagli said.

Wing Sales Take Flight
In a poll conducted for the National Chicken Council, four in five U.S. adults said they eat chicken wings, up two percentage points from last year. Although Super Bowl weekend is traditionally the hottest time for wing sales, the organization estimates that overall in 2014 more than 13.5 billion chicken wings–more than three billion pounds–will be sold.

Recently, York, Pa.-based Rutter’s Farm Stores introduced chicken wings on its menu. The jumbo-size wings are sold in quantities of six or 12 for snacking and for meals.

Rutter’s wings are available in original, barbecue sauce, buffalo sauce, straight hot sauce and Old Bay seasoning. Jerry Weiner, vice president of foodservice for the chain, said that the wings are now in 46 of the chain’s 60 stores and have been “extremely well received” by customers.