The demand for tea grows as more consumers seek out healthy beverages. 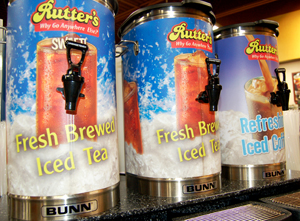 Texas technology professional Sheryl Thompson spent about a decade drinking four 12-ounce cans of brand-name soda every day. When she wanted to lose weight, she adopted unsweetened iced tea as her beverage of choice, began eating better and exercising on a regular schedule. “It took me six months to acquire a taste for unsweetened tea,” she recalled.

Like Thompson, many consumers are cutting down on or eliminating soft drinks completely – both the regular and the sugar-free versions – because they prefer to drink what they believe is a healthier beverage.

The trend was born a decade ago as increasingly health-conscious consumers began reducing their sugar consumption and eliminating sugar substitutes, such as Aspartame. Many have shunned soft drinks in favor of tea, as well as energy drinks and bottled water, despite the efforts of the major beverage companies to launch lower-calorie products, such as Dr Pepper Ten and Pepsi Next.

Those consumers are not alone. Even Sandy Douglas, president of Coca-Cola North America, limits his own soft drink consumption. In August, he told a news reporter that he drinks only one Coca-Cola a day, usually before noon, but he may have a Coke Zero later in the afternoon.

It’s Good to be Tea
Tea, on the other hand, has a great reputation. Consumed in the East for thousands of years, tea has long been credited with supporting weight loss efforts, lowering cholesterol and helping to boost mental alertness. Many types of tea naturally contain antioxidants, which help to prevent damage to the body’s cells. Those antioxidants are even more effective when the tea has been enhanced with a squeeze of lemon or lime. As a bonus, tea has no sodium, something most sodas and energy drinks can’t claim.

Last month, the European Society of Cardiology Congress in Barcelona announced that drinking tea reduces non-cardiovascular mortality by 24%. Researchers tracked the medical history of 131,000 people, ages 18 to 95, who had a health check at a designated Paris medical center between January 2001 and December 2008.

The study found that people who drank tea were more physically active, were less likely to be smokers and had a better cardiovascular risk profile than those who consumed coffee.

Health-focused shoppers have responded to tea’s positive publicity. According to Mintel, the consumer research organization, U.S. retail sales of tea jumped 19.8% from 2009 to estimated 2014, reaching $7.3 billion in sales. The popularity of refrigerated ready-to-drink teas and bagged/loose leaf/single-cup teas drove that growth.

Mintel predicts tea sales will increase an additional 16.8 percent between estimated 2014 and 2019 (or 4.7% when adjusted for inflation). The only segment that saw a dip was instant tea, a trend that is expected to continue through 2019.

Bring on the Tea Bags
Convenience store chains that keep up with current trends have responded to the flourishing tea-buying traffic in several ways. Some sell quarts and gallons of ready-to-drink tea in store coolers. Others put tea bags and fresh-brewed iced tea on the beverage bar. And then there are those convenience outlets that do it all.

The QuikTrip convenience chain, headquartered in Tulsa, Okla., remodeled their stores several years ago and used that opportunity to upgrade the QT iced tea offerings.

“We sell at least 10 different flavors of fresh-brewed tea,” said Mike Thornbrugh, manager of public and government affairs for QuikTrip. “And it’s not just a fad; it’s growing. People are shifting away from sodas.”

Dallas-based 7-Eleven stores recently rolled out a proprietary fresh-brewed iced tea program under the company’s Chillers brand. Shoppers at more than 3,000 locations can choose from sweet or unsweetened iced tea and take it home in Big Gulp or Double Gulp cups. Both varieties are made from a blend of black tea leaves that was created exclusively for 7-Eleven stores.

“More than half of the people who visit a 7-Eleven store buy something to drink,” said Nancy Smith, 7-Eleven senior vice president of fresh food and proprietary beverage merchandising. “Fresh-brewed iced tea provides a refreshing, non-carbonated cold beverage option for our guests.”

Robert Perkins, vice president for marketing at Rutter’s Farm Stores, in York, Penn., described his company’s ready-to-drink tea program as “one of the best in Pennsylvania.”

Because Rutter’s has its own dairy, company is able to produce and bottle fresh-brewed tea in pint, quart, half-gallon and gallon containers. Each store has two or three vault doors of the proprietary beverage, “and we sell quite a bit of it.”

Packaging is important to the customer, Perkins added. “We just upgraded our packaging with recyclable clear plastic that has a craft look, and it’s been very successful.”

Shoppers have several flavor options, including peach, raspberry, cherry, orange, diet green tea and a Southern-style brew. “We just came out with a decaf, a cherry pomegranate and a mint,” he added. “And we also have an in-store hot tea program.”

The convenience industry’s diverse flavor offerings should appeal to consumers, especially young adults who seek out novel tastes in the tea segment, Mintel reports. Research indicates than two out of five shoppers say they’d be interested in more indulgent flavors, tea blends and chai tea offerings, while more than a third would like a tea with higher caffeine content.

Selling Tea and Sodas
The sales decline in soft drinks began 10 years ago and has intensified over the last five. With the current interest in better-for-you food and drinks, industry watchers don’t expect that shift in consumer behaviors to reverse itself soon. But don’t make plans to move soft drinks out of the store any time soon.

Despite the growing interest in healthier beverages, the increase in U.S. tea consumption and the ongoing controversy about sodas and what they’re made of, soft drinks remain the largest single beverage category, with 43 percent of the market, according to the Beverage Marketing Corporation.

That information doesn’t impress Sheryl Thompson, and nothing is going to send her back to her four-can-per-day soda habit. She’s completely sold on tea. “Hot tea is very calming, and cold tea is very refreshing,” she said. “And they both have such a good taste.”

Most Popular Brewed Tea Types
According to retailers with fresh-brewed tea programs that Convenience Store Decisions spoke with, these iced tea options are customer favorites: