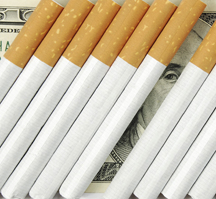 The fine for a sixth tobacco violation has increased.

The FDA has revised its schedule of fines imposed on retailers that violate the agency’s federal tobacco regulations, including the sale of cigarettes, roll-your-own tobacco, or smokeless tobacco to a minor, the National Association of Tobacco Outlets (NATO) reported.

Under the Tobacco Control Act, there are six levels of violations and respective FDA fines. Recently, the FDA increased the fine for a sixth violation as allowed by the Federal Civil Penalties Inflation Adjustment Act, a federal law that allows a federal agency to increase fines based on the inflation rate with a maximum 10% increase in a fine.

The current fine structure used by the FDA for retail violations is as follows:

First Violation: No fine, but a warning letter is issued.

The FDA uses the schedule above to determine the amount of fine that the FDA will seek to impose on a retailer that violates the federal tobacco regulations, NATO reported. On a first inspection, regardless of the number of violations, the FDA issues a warning letter to the retailer detailing the violations, but does not assess a fine. There can be more than one violation per inspection.

For example, if a retailer sells a tobacco product to an undercover minor and does not request and check a proper photo identification, this equals two violations.

The fact that the amount of FDA fines can increase significantly for additional violations by a retailer at the same location demonstrates the need for retailers to regularly train their store personnel to properly request and check photo IDs and prevent the sale of tobacco products to an underage youth.