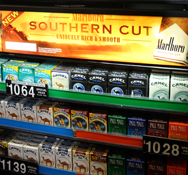 Cigarettes Are still a vital c-store category despite recent declining sales. Restrictive regulations and new competition in the form of both dollar stores and alternative products like e-cigarettes and vapor tanks are forcing retailers to react and innovate.
Still, the category has generated big headlines lately.

This past July, Reynolds American Inc. entered into an agreement to acquire Lorillard Inc. in a cash-and-stock deal worth about $25 billion, blending Reynolds’ Camel and Pall Mall cigarette brands with Lorillard’s Newport menthol product to create a stouter product mix and pose stiffer competition to industry leader Altria Inc., maker of Marlboro.

In early September, it was reported that the acquisition may be delayed as antitrust authorities take a closer look. The two companies were asked for additional information by the Federal Trade Commission (FTC). Wells Fargo predicted that the deal will be approved by the FTC next year.

Success could mean giving up some margin, and sourcing additional income and revenue streams.

CONTAINING CHALLENGES
“As all retailers know, that business continues to decline,” said David Bishop, managing partner at Balvor LLC, a sales and marketing firm in Barrington, Ill. that provides analytic, consulting, research and sales support services. “The added headwinds now are that (cigarettes) have new competition, or rather let’s say the competition is changing. On the one hand we have CVS backing out, and that’s a good thing for retailers who were close to CVS stores. On the other hand we have dollar stores getting into the business, and it works conversely there.”

As a result pricing has become the most important driver into the c-store. “Having those competitive prices is a necessity, but also communicating those prices using pole signs and window signs to reach the consumers outside the door to get them in,”said Bishop, who explained that the second major issue continues to be availability—having the right brands in stock.

“The industry is sure changing,” said Amer Hawatmeh, president of St. George Oil in St. Louis, operator of 10 Coast to Coast convenience stores. “It looks like we’re going to have a set of cigarettes in our stores with (only) two companies.”
What that means, he added, is opportunity.

“I think the basic premise that is going to exist is that if you raise your margin, as long as all the prices are set within the discount rate, you may be able to get more margin out of it,” Hawatmeh said. “I think that’s the direction that I’m going to go in respect to all of the secondary products, such as paper and all these other new age cigarette types of products. I believe that you should make the best margin you can make.”

OPPORTUNITY UPDATES
The decision by pharmacy chain CVS to exit the tobacco business has opened a door for other retailers to boost their market share, some experts say.

“I would suggest that CVS’ recent action to pull cigarettes entirely from their stores shows the market is shifting,” said Coxsackie, N.Y.-based Retail Consultant Bob Phibbs, “and tobacco sales are not the be-all and end-all they were just a few years ago.”
While a recent British study found that smokers were 60% more likely to stop smoking when using e-cigarettes, the U.S. Food and Drug Administration (FDA) forbids e-cigarette marketers from claiming them as cessation products.

Lori Bull, category manager with Fabulous Freddy’s Car Wash in Las Vegas, suggested that the earlier-than-expected pulling of cigarettes by CVS presented some convenience store operators with an opportunity. “Where will those customers go? How do you attract them to your c-store? What (CVS’ decision) means to us is the opportunity for us to take back some customers from them.”

The stakes could be even higher than simply adding tobacco customers, Bull noted, since the two retailers are competing on more levels than ever before.

“As you know, they have expanded into the arena of foods, so they’re almost operating as a small or large, convenience store,” Bull said. “This gives us an opportunity to get back some customers who went to CVS.”

Fabulous Freddy’s has yet to implement a strategy that targets one-time CVS customers.

“I wish there was a way, and I don’t know what that way would be,” said Bull. “But we figure if they’re no longer going to CVS, they’re going to go somewhere. Of course, we are limited in the signage we can put out, unfortunately, so there is no active way we can do that.”

With cigarettes in decline, Bull plans to offer an even broader selection of tobacco products that appeal to smokers.

“Cigarettes are still a large enough revenue source that there has got to be a major concentration on them. So the best thing you can do is supplement your cigarette business with other like items, such as e-cigarettes, which we have,” Bull said. “We have also branched out into the hookah arena, and into all those hookah supplies, not the pipes and such, but the hookah tobacco.”

CHANGING THE LANDSCAPE
The cigarette business is changing also because of uncertainty resulting from the planned merger.

“Obviously, anything that anyone says at this point is going to be purely speculative. Some would say that net/net, it is not going to change the landscape,” Bishop said. “I think that is kind of Pollyanna to think. It will change the landscape. The question is, what will Commonwealth-Altadis’ position be when and if they assume ownership of the brands that Lorillard and Reynolds are divesting?”

The concern from the retailer perspective, Bishop continued, is that merger will put increased financial pressure on them. “In their minds, the competition has been lessened in terms of the fact that Reynolds has the Newport brand in their wheelhouse, and margins will compress at an accelerated rate. That still remains to be seen. Obviously, everyone is going to compete for space.”

Retailers are justifiably concerned that the business is going to get tougher, Bishop added. “Margin compression is the biggest concern right now.”

As Bishop noted, combustible cigarettes are still a critical commodity. “Cigarettes represent 90% of the business, and while they have a slow kind of decline, I don’t see anything in the near future that is going to change that. Cigarettes are going to remain there,” he said.

On the profitability side, however, Bishop said c-store retailers are finding a lot of superior margins in OTP at present.
“OTP margins are growing, primarily as a result of what we’ve seen with the growth of e-cigarettes,” Bishop said. “As the e-cigarette business evolves from the closed systems, those disposable rechargeables, to the open systems—the vaporizers and e-liquids—those margins will expand further.”