While the industry’s sales remain strong, the industry faces challenges from competing retail channels. U.S. retailers can learn a lesson from overseas marketers. 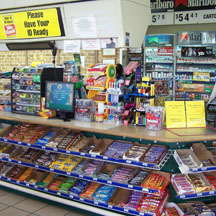 In 2012, convenience stores outperformed grocery stores and drugstores in the U.S. both by dollar sales and volume growth. They netted $708.2 billion in revenue and $77.8 billion in gross profit. However, just this healthy financial picture doesn’t tell the whole story.

For some years now, c-stores in the U.S. have been sandwiched by retail offensive on one side and consumer expectation on the other. Big box retailers are encroaching on c-store territory with small format outlets: Walmart’s experiment with express stores targeting urban neighborhoods is one example.

Also, smaller-format stores, namely drug, dollar and grocery, are taking a share of the c-store market. At the other end, customers are flocking to supermarkets and large-format stores, which offer considerably lower prices than their neighborhood convenience store.

To make things worse, the c-store’s defining proposition, as the place to pick up a pack of cigarettes while tanking up on fuel, is losing value on account of flagging sales of both commodities.

But it’s not just in U.S. retailing that David is taking on Goliath. Halfway around the world, a similar scenario is playing out in India, where the neighborhood “kirana” (mom and pop) shop is reinventing itself to withstand the arrival of organized retail on its home turf. Could the American c-store learn a trick or two from its less organized but quite creative counterpart?

It is estimated that 7-10 million kirana shops account for more than 90% of India’s retail market. This is where generations of Indians have bought their groceries. Like the American c-store, the kirana outlet survives because it is conveniently located and entrenched in the neighborhood. But whereas the c-store is a roomy 2,800-square-foot outlet, with 2,900 stock-keeping SKUs on average, the kirana shop packs its 400 square feet of space to the rafters with as many as 4,000 SKUs.

Historically, what kiranas lacked in ambience, they made up in customer-centricity. Accordingly, they offered interest-free credit, localized product assortments and affordable pack sizes to fulfill the typical needs of their community.

Today, they are drawing upon their customer knowledge to survive against the odds posed by modern retail. For instance, when a customer changes his brand of tea, or even pack size for that matter, the kirana shop’s “mental big data systems” record that shift to be recalled during the customer’s next visit. Now, the shop is topping that up with modern retail practices like self-service and visual merchandizing.

Big Lessons From a Small Store

This is possibly the most interesting takeaway for the American convenience retailer—to dive deeper and invest in building customer relationships based on value that is larger than just convenience.

For instance, the c-store could consider offering free delivery without a minimum order threshold, something that the kirana store has done for ages. It might also like to revisit its delivery structure, to keep pace with the rising trend of online grocery shopping, which is expected to become a $25 billion opportunity next year. This is already happening in the kirana context. More than 3,000 shops in 31 Indian cities are on the panel of AaramShop, an online grocery shopping network, which routes customers’ orders to the closest neighborhood outlet, which are then home delivered.

There’s even opportunity to play with price, never a strength of the convenience stores or kirana stores. To counter the economies of scale of big box retail, India’s kiranas are forming regional associations to harness the cost advantages of group buying; they’re also creating economical private labeled provisions as a value for money option to attract price conscious buyers.

Convenience stores must seriously consider this option, given that private labels make up only 2.4% of sales, versus between 15-18% at supermarkets and drugstores. In fact, private labels would be doubly advantageous for convenience retailers because they also deliver higher margins.

Another way to drive up margin is through better category management. With the mainstay of c-store retailing, namely fuel and cigarette sales, dwindling, it is time to evaluate other alternatives. The evidence is in favor of this—research shows that store sales contribute 27% to the sales of the convenience store industry, but 66% to profit.

Unfortunately, most high gross margin categories, like grocery or health & beauty care, never lead sales numbers. There is a clear opportunity to emulate the kirana shop, which is anchored around grocery sales, and treats the sale of impulse products as purely secondary.

The Future of Convenience

The c-store has built its presence around the concept of convenience. However, with the consumer definition of convenience itself changing, c-stores must adapt to the new lexicon to stay relevant to their customers.

The good news is that the core value proposition of the c-store format remains undiminished; but this also means that it will attract competition from other retailers, big and small. The c-store has proximity and community roots on its side. It must bolster this with customer-centricity, product diversity and value for money in defense of its territory.

Connecting With Your Customers

• Texts and Apps: C-stores are closer to the competition.

What kind of content engages shoppers? The top five reasons cited by shoppers for connecting with a convenience store:

• Finding out about sales or special deals: 62%

• Updates on new products or offerings: 55%

• Seeing what products are offered: 48%

Suresh Bharadwaj is the Industry Principal of Retail, CPG, Logistics and Life Sciences for Infosys, a global retail consulting firm.