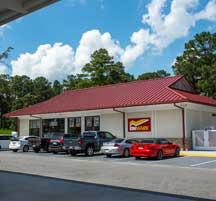 All five stores will have gas and diesel fueling stations, fresh-brewed coffee and other convenience store items.

All five stores will have gas and diesel fueling stations, fresh-brewed coffee and other convenience store items. Furthering Enmark’s commitment to foodservice, each store will have fresh food prepared on site, including hot breakfast items, chicken, sandwiches, pizza, and more. The Enmark cash card fuel discount will bring more competitive prices to the market and reduce expenses for residents of the area.

“As we expand our reach in South Carolina, our stores will continue to strive to be the best service stations and convenience stores, from the customer’s perspective, in all the markets in which we operate, as stated by our mission,” said Vice President Houstoun Demere.

Demere added, “We are excited to expand into a new market in Aiken, SC. Logistically it fits nicely within our existing store footprint as it is very close to the Augusta, Ga. market. The addition of four stores gives us a strong presence in the Augusta/Aiken area. This is our second location on Hilton Head and now we are able to serve customers on both ends of the island.”

With the addition of the five new stores, Enmark Stations Inc. currently owns and operates 64 stores in Georgia, South Carolina and North Carolina.