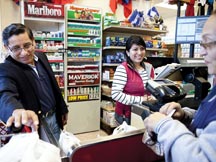 “Strategic insight has never been more important, precisely because the retail world is changing so fast,” Munford told the audience at the National Association of Convenience Stores’ annual convention, which ran Oct. 7-10 at The Las Vegas Convention Center.

Those changes, Bona added, extend well beyond the fallout from the rise of ecommerce.   “For example, the phenomenon of channel-blurring has led to a proliferation of competitors from outside the traditional c-store sector,” he said. “Whether you’re talking about c-stores, QSR and fast food chains or pharmacies and grocery stores, all of these retail categories are chasing the same consumers. C-stores must raise their game.”

In Europe and the U.S. alike, a growing number of c-store chains now aim to accomplish this by offering dramatically improved food offerings, often in sumptuous settings relative to the c-stores of the past, Munford said. According to a September 2014 report by Nielson, fresh foods will account for up to 50% of category sales in Europe’s next-generation c-stores, he noted.

“These chains understand that time-pressed consumers crave healthier and better offerings in both the foodservice and grocery areas,” he said. Indeed, in one Technomic survey, a sizeable majority—64%—said eating healthy was important. And earlier this year, two-fifths of consumers told the research firm they would visit convenience stores for prepared foods more often if freshness and quality were improved, Bona noted. “But bear in mind, convenience-sector foodservice is already a $10.9 billion industry, according to Technomic,” he said.

However, the trick is not just to offer higher-quality food, but also to elevate the overall customer experience. “Coffee shops in the U.K., for example, are booming, not because consumers are drinking more coffee, but because they fill a ‘social venue’ gap in society—one that used to be met by pubs,” Bona said. “Today’s c-stores have the opportunity to do the same thing.”

Adding to the pressure is the reality that brick-and-mortar retail in general is becoming more disciplined, articulate and differentiated, largely in response to ecommerce. In this context, c-stores that fail to innovate are at risk of falling behind. “What are you doing to become more differentiated?” Bona asked the audience. “What improvements are you making in the area of customer service? Through innovation, you can actually transcend old perceptions of what convenience means and forge a new paradigm.”

Over the course of the presentation, Bona and Munford cited a raft of research illustrating rapidly changing consumer tastes and preferences. They also pointed to smart use of technology by Rutter’s and Tesco Express. The latter chain, Munford noted, has been experimenting with self-checkout stations that are half the size of standard units, with an overall goal of slashing wait times.

With respect to foodservice, Bona and Munford noted, a central issue facing the industry is whether to develop their own foodservice brands or to engage in brand partnerships. “In Europe, two of the most interesting partnership models to date are the Euro Garages ‘convenience malls’ and the ‘brand implant’ model being developed by Tesco,” Munford related. “The Euro Garages are essentially a branded partner offer. Picture a hip-looking, corrugated building alongside the road, with the likes of Starbucks Coffee or Subway inside.”

Euro Garages has already rolled out hundreds of these locations, Munford said. For its part, Tesco has partnered with foodservice brands such as Harris & Hoole, Giraffe Cafeì, Euphorium and Fred’s to good effect. “This use of the ‘friendly culture’ of popular partner brands was a savvy move that is proving popular with consumers,” Munford said. Likewise, European convenience retailer SPAR has partnered with independent U.K. retailer Eat17 to create a retail destination that combines convenience, restaurant and grocery.

In the conclusion to the presentation, Bona summed up the takeaway from these trends. “In the old days, people went to c-stores simply because they were easy to shop,” he said. “Today, they’re looking for something more. They want a pleasant environment, high-quality food, convenient locations, and, yes, good deals. The challenge moving forward is to exceed these rising expectations on all fronts.”