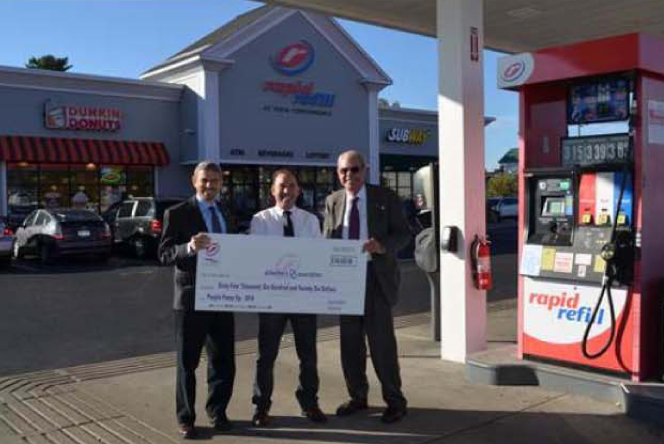 An industry leader, Rapid Refill is in its fourth year raising money and awareness for the Alzheimer cause. Its “Purple Pump Up” campaign, named for the Alzheimer’s cause color, included asking customers for donations as well as donating a percentage of gas sales on June 21, on which the Association holds its Longest Day event.

“Rapid Refill is an extraordinary partner for the Alzheimer’s cause,” said James Wessler, president/CEO of the Alzheimer’s Association, MA/NH Chapter. “Rapid Refill has a strong sense of community involvement and they recognized that this disease has a tremendous impact. This kind of leadership is so necessary if we are going to turn the tide on Alzheimer’s.”

Rapid Refill’s Jim Garrett, a member of the Alzheimer’s Association board, is strong in his commitment to the cause as shown by Volta’s willingness to match its customers’ donations. “This disease must be stopped before it affects even more people,” said Garrett whose family has been directly affected by Alzheimer’s.

Garrett commended the Rapid Refill team lead by Ben Bolen and Anna Tully for their enthusiastic execution of this enormously successful campaign.

“In addition to the money raised, this kind of program does a tremendous service in terms of raising public awareness,” said Wessler. According to the Alzheimer’s Association, there are nearly 16 million family caregivers who provide care for the more than five million Americans affected with the disease. “They need hope. Programs like Rapid Refill’s let them know that people are working to make a difference.”

Garrett said his store associates have talked to over 200,000 customers about this dreadful disease over the last four years the program has been in effect, raising public awareness.

Garret indicated that he would be willing to provide other convenience store owners with the format and materials to run a similar campaign, to help defeat Alzheimer’s.

Rapid Refill is part of the family-owned Volta Group, based in Plymouth, Mass., which distributes petroleum products in Massachusetts, New Hampshire, Rhode Island and Connecticut.

The Alzheimer’s Association is the leading nonprofit funder of Alzheimer’s research and also provides services and programs for those with Alzheimer’s, family and professional caregivers in the form of support groups, a 24/7 Helpline, care consultation, advocacy efforts, education programs.