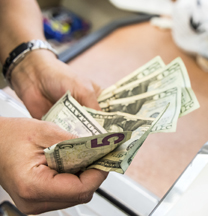 Wells Fargo weighs in on how the price at the pump is impacting fuel and merchandise sales.

Wells Fargo’s analysis revealed that c-stores typically realize significant benefits in both fuel and merchandise financial results during periods when crude/gas fall because consumers have greater disposable income to spend on more gas and in-store merchandise.

“Importantly, c-stores benefit from higher fuel margins, which have more than doubled since June to 33.6 cents per gallon, according to OPIS. In fact, during the last major drop in crude in H1 2012, our c-store universe averaged 15% growth in fuel sales per store (the highest since 2012), 5% growth in merchandise sales (vs. 3% when gas sales are down), and 15.4-cents-per-gallon fuel margins (vs. 13.8 cents per gallon average since 2012). As a result, we expect strong Q3 and Q4, with solid sequential improvements in fuel margins, fuel gallon growth, and merchandise same store sales,” noted Wells Fargo.