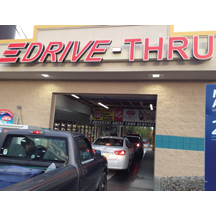 Sami’s Quick Stop on the corner of East Midlothian Blvd. and Youngstown-Poland Road in Youngstown, Ohio recently wowed customers when it reopened its doors in September, following a major $1.8 million renovation.

The new and improved 24-hour location was expanded from 2,400 square feet to 5,500 square feet, and features two drive-throughs, as well as a 1,800-square-foot standalone Dunkin’ Donuts, an expanded foodservice area, a new growler program and an outdoor mini-park.

Sami Rafidi Sr., CEO of SFR Group Inc., founded Sami’s Quick Stop in 1976. Having grown up in the neighborhood grocery business, he opened his first convenience store when he was still a sophomore in college. Today, the chain has 12 c-stores, including six Sami’s Quick Stop locations in the greater Youngstown area.

The East Midlothian Blvd. store has been in Rafidi’s portfolio since the early 80s when he purchased it from 7-Eleven as it exited the market area. Rafidi’s vision with the remodel was to “merge and create synergy of convenience and destination. In other words, we have created our c-store to be a destination property,” he said.

Drive-Through Service
The Sami’s Quick Stop convenience store building sits on the center of the 1.2-acre property. In front of the store, is the forecourt featuring Valero-branded gas, complete with interactive pump toppers displaying videos and ads as customers fuel up.

To the right of the convenience store is a drive-through tunnel. Cars can drive inside, where clerks take and then fill their beverage orders. “Our tunnel drive-through service is primarily for c-store orders, such as for milk, beverages, beer, wine or cigarettes,” Rafidi said.

On the left side of the building is a drive-up pickup window dedicated specifically to foodservice orders. The standalone Dunkin’ Donuts also offers its own drive-through. “We actually have three drive-throughs on this property,” noted Rafidi. Customers also have the option to walk inside the store to purchase their items, if they prefer.

“America runs on Dunkin’… and speed! Our customers want to move fast and they want everything to be convenient. It’s no different from what we see with the national fast feeders where the value is fast food—people love to get in and get out, and the faster you can serve them the better,” said Rafidi, regarding the company’s strategy behind the drive-through concept.

In light of increased competition from other channels, such as drug stores and dollar stores, not to mention QSRs, Rafidi has worked to differentiate his chain by offering a fast, convenient one-stop shop.

“What we do best is we meet destination needs,” Rafidi said. “Whatever the customer wants, we can get it to them quicker—people can get in and out of our facilities quickly, and that offers us a competitive advantage.”

Food Focus
Sami’s Quick Stop has excelled at its deli operation for almost 40 years. Its deli features made-to-order sandwiches that are freshly prepared while the customer watches.

When it came time to renovate the Midlothian Blvd. store, Sami’s took its foodservice up a notch. Of the store’s 5,500 square feet, some 2,000 square feet are now devoted entirely to foodservice, including a deli program, a Giuseppe’s pizza program and a grab-and-go section, plus a small seating area.

“The store had very strong sales, particularly the food sales, before the renovation, so we knew we could expand our food and beverage offerings and branch into some unique and unlike items,” Rafidi said.

“Giuseppe’s Pizza is a regional pizza company founded in Cleveland. We actually have a full pizzeria within the convenience store and we offer slices as well as whole pies and hot subs. Our pizza is really good. It’s not typical convenience store pizza. It’s a fresh dough product,” he added. “Our fresh deli subs and our grab-and-go offering have been around for a long time, so it was a natural growth step for us to add the pizza and hot subs and slices to go.”

A warmer unit also sits at the checkout area featuring hot slices of the Giuseppe’s pizza. “Strategically it’s an outstanding impulse item for us,” Rafidi said.

The Giuseppe’s pizza counter is positioned next to the deli. Nearby, a grab-and-go cooler features a large array of quick-to-go items, including salads, wraps and cold pre-made sandwiches. Employees are cross-trained to run the foodservice areas as well as the cash register.

The beverage program at Sami’s Quick Stop also received an upgrade. The store introduced a new, frozen slushie program, and a Hershey Creamery Co. Shake Shop Express machine. “Customers put a cup in the unit and in a minute they have a milkshake,” Rafidi said.

The store also features a Coca-Cola Freestyle unit that allows guests to select from more than 100 drink choices, including mixing their own favorite combinations.

“Coca Cola sent people to the store to do sampling and demonstrations on how to use the machine. When you first walk up to the screen it’s like an iPad—it’s really neat, and I can’t tell you how many smiles I see on customers’ faces as they are walking up to that screen,” Rafidi said. “We’re selling more fountain drinks than we ever did at the location before the remodel, so it’s been a success.”

Beer On Tap
In fitting with an ongoing trend, Sami’s Quick Stop debuted a growler beer program upon its reopening. With eight beers on tap at a time, Sami’s offers both national and regional beer varieties and sells it to customers in 32-ounce or 64-ounce growlers. The varieties offered change from week to week, and customers can bring back the growler for a refill.

“We have a unique system for filling the bottles—it’s called the PEGAS system—and it removes all the oxygen from the bottle and fills it from the bottom up. The nice thing about that is it keeps the beer fresh longer and gives you the ability to sell fresh craft beer pretty quickly as opposed to doing it from a tap into the bottle,” Rafidi said.

Unique Amenities
As a true destination station for customers, Sami’s Quick Stop even features a mini park where customers can unwind. The park features benches, a flag pole and newly designed landscaping as well as a “Welcome To Struthers” sign.

“We added the sign because our store is actually the first property on the gateway entering into the municipality of Struthers. We received a proclamation from the city for our contribution to the area that was delivered by the mayor of Struthers during our opening day celebration,” Rafidi said.

Growing Into The Future
Sami’s Quick Stop is monitoring the success of its new store features, including the growler program, Giuseppe’s pizza program and Coca-Cola freestyle machine, with the intention of potentially expanding them into its other stores as it continuously works to make all its sites one-stop shopping destinations.

“We’ll continue to look at this new generation concept and its performance,” said Rafidi. “We absolutely have plans for future development in our market, including negotiating with national brands for new sites with upgrades to existing stores, raise and rebuilds or even new facilities.”