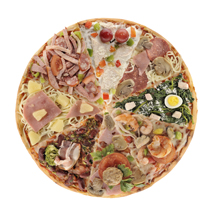 When it comes to tastier and more nutritious pizza, consumers want their pie and they want it fresh.

American consumers have always expected to have their cake and eat it, too. That also apply to pie—as in pizza pie.
Americans might love pizza, but they also desire healthy, lower-calorie options. Just this past September, Pizza Hut began testing a lighter pizza at dozens of units in Toledo, Ohio, and West Palm Beach, Fla. The “Skinny Slice” pies are made with less dough and are lighter on the toppings.

In Toledo locations, diners are invited to create their own Skinny Slice pies with up to five toppings, with slices containing no more than 300 calories. In West Palm Beach, customers can pick from one of six pre-determined pies, each about 250 calories. Pizza Hut is also opening Slice Bars, planning 20 total by year’s end.

According to this year’s “Pizza Consumer Trend Report,” conducted by research firm Technomic, only 22% of pizza consumers polled said their pizza occasions are influenced by health concerns—down from 28% in 2012.

However, two out of five consumers (41%) preferred pizza establishments to offer healthier ingredients, examples being whole wheat crusts (42%), and organic toppings and crusts.

While the results seem contradictory in terms of the demand for healthier pizza options, the researchers’ conclusion is instructive. “Though consumers do not prioritize health for pizza occasions, better-for-you qualities still resonate. High quality pizza, for example, will appeal more than a traditionally ‘healthy’ pizza, as a majority of consumers want more pizza establishments to offer premium (64%) and all-natural (53%) pizza ingredients.”

PIECE OF MIND
For convenience stores, introducing a pizza product that caters to consumers looking to lower their calorie count—either through healthier ingredients or simply through a modified-size serving—is a challenge.

Just ask Tariq Khan, CEO of Sentar Oil Inc., an eight-store convenience chain based in Rockville Centre, N.Y., who said lower-calorie pizza offerings should strike a positive chord with c-store customers. His chain is looking at its own pizza options.

“I really think so; that is the way to go about it,” Kahn said. “Take California Pizza Kitchen. I love their pizza because their dough is very skinny, their slice is very skinny, and they do not put so much cheese that it’s flowing.”
Khan was quick to add, however, that even pizza products that appeal to consumers’ desire for healthier consumption will only work in specific locations because of the local culture.

“I am in New York, and I am surrounded by pizza parlors left and right, and then all the chains coming in are offering half the price,” Khan said. “If you happen to be in New York, New Jersey or Long Island and Westchester, there is a pizza store on every main street. In my store we can’t sell more than four or five pies in 24 hours. If you’re in Long Island and the five boroughs, northern New Jersey, places in Connecticut, God bless you. You are competing with mom and pops, and they will still outdo you three to one. It is very, very tough.”

Chief among the factors that help ensure success for a pizza program in c-stores that Montgomery emphasized are product variety, immediate availability and a product that is fresh and hot, looks and tastes good, is priced reasonably and is displayed so the customers can see what they are buying.

“This is true whether it is a whole pie, personal pan or slice program,” Montgomery said.

Creating an all-encompassing pizza menu that fits well within a c-store setting can be a challenge, however.
“The pizza world is different from the convenience store world,” said Pete Lachapelle, president of the National Association of Pizzeria Operators, based in Louisville, Ky. “Until convenience stores can sell something that is a little bit more elegant than the Slurpee of pizza, the quality won’t be there.”

Lachapelle believes c-stores are less equipped to accommodate special consumer demands because there are less opportunities for customization when it comes to pizza offerings.

I see Pizza Hut going after it more aggressively. They are trying to broaden their reach, and so they may go for a ‘skinny’ slice. I remember five or six years ago when we were really into the skinny phase, we were finding pizza being offered on pieces of lettuce. I mean, c’mon. This is nothing more than a little bit better adaptation to that.”

All that being said, Lachapelle said convenience stores can help customers cut pizza calories by offering product by the slice.

While it appears that lower-calorie pizzas are an acquired taste with some customers, consumer research is identifying pizza options that resonate with other patrons.

As the firm noted based on its survey, the best received pizza combinations ranged from simple, such as BBQ chicken and cilantro, to surprising, such as lobster, prosciutto, sweet Italian sausage and ricotta cheese.

What became clear in the results was that while single ingredients may have limited appeal, when combined with other flavors breakthroughs can emerge in the minds of consumers. “The unique, optimized combinations struck a chord, illustrating an opportunity to succeed in market,” according to the study.

“In fact, none of those ingredients ranked in the top 10 individually with consumers. Lobster was in the middle of the pack, ranking 35 on a list of 75 potential toppings. But when lobster was combined with a salty meat like prosciutto and a spicy Italian sausage, a somewhat surprising yet winning combination of sweet, salty and spicy emerged in consumer’s minds,” researchers said.

In the end, single ingredients may have limited appeal, “but when combined with other tastes and flavors they can be incredibly powerful. Testing flavor combinations with consumers early in the process can yield unique product ideas that differentiate on flavor,” according to Affinnova.