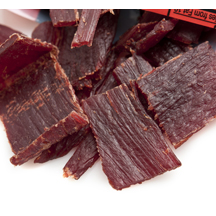 Consumers are finding the protein and satisfaction they want in dried meat snacks.

An increasing number of American consumers are looking for snacks that do more than taste good. In a recent survey conducted by Nielsen, a consumer research organization, over half of the respondents said it was “very important” for a snack to be high in protein. Some 35% said it was “moderately important.”

What’s more, consumers may be adding more protein to their diet because medical research has shown that protein-rich foods can satisfy hunger pangs better and longer than most carbohydrates. Thats seems to be a plus for people who are trying to manage their weight and overall health.

As a result of this quest for protein-packed snacks, the meat snacks category is “really exploding,” said David Walsh, manager of marketing and member service for the Snack Food Association, the international trade association of the snack food industry. He noted that it has the second highest growth rate of all snack categories, bested only by ready-to-eat and caramel popcorn.

“We’re seeing a lot of different types of jerkys and meat snacks coming out, many in gourmet flavors, using different types of meats, such as turkey and some even energy infused to increase their appeal to a wider range of consumers, including women and Millennials,” Walsh said. “We’re also seeing many new meat snack companies entering the marketplace.”

PRODUCT INNOVATION
All of that innovation is adding up to increased register rings at Scott Zaremba’s five Zarco USA convenience stores in Kansas.

“We’re seeing a lot of niche manufacturers, usually smaller and regional players, driving sales of meat snacks in the stores,” said Zaremba, owner and CEO of Zarco. “We’re happy to bring their products into our stores if they come in with the right product, package and price point because our customers are definitely looking for variety and new products in this category. Each company brings with it its own marketing and merchandising style and that also adds energy to the category.”

With so many new products coming out and so much consumer buzz about the category, Zaremba increased his shelf space allotment for meat snack displays by 20% over the past year and a half. In addition to the regular full-scale inline display, he has placed smaller displays throughout the stores, including up front at the cash registers, to get the greatest promotional punch for the category.

Packaging is an important part of successful merchandising of dried meat snacks, Zaremba pointed out. For Zarco customers, it seems like the bigger, the better.

“Our shoppers like the big resealable bags and that’s great because it’s a $5-$15 ring for us instead of the smaller ring for the individual size,” Zaremba said.

While traditional and hickory flavored are still the best sellers in his stores, Zaremba noted that turkey jerky sales are growing. Strips are also the fastest moving varieties.

But not every new innovation catches on. Zaremba recalled the debut of salmon jerky about two years ago.
“That just didn’t sell,” he said.

Zarco refreshes its meat snack SKUs about every six months. If there is an exceptional amount of new product activity in the market, the retailer will do it more often.

ON THE RISE
At E-Z Mart convenience stores, the dried meat snack category is “experiencing tremendous growth for 2014,” said Danna Huskey, category manager for the 290 unit chain, which has locations in Arkansas, Texas, Oklahoma and Louisiana.

While the main dried meat snack consumers are still male, it’s the Millennial-aged females who seem to be trying the turkey bites and sausage bites, Huskey said. As for product form, she explained that “sticks are on fire this year,” probably because they are the more affordable options and are the items that the stores have been promoting most heavily this year.

“When it comes to flavors, customers are generally sticking to the tried and true,” Huskey said. “Teriyaki, original and peppered remain the best sellers in the category and no new items can seem to penetrate the top sellers’ circle. New items don’t seem to stick around very long.”

E-Z Mart stores carry around 50 SKUs of meat snacks, a number that has been consistent for at least the past decade. Sets are refreshed every quarter after review for changes, such as UPC issues, removal of discontinued items and replacing products, she said.

Space allotment for the products varies by store. Some dedicate three feet, others four feet. Some stores may have an end cap of jerky, while others may just have it in line with the rest of the meat snack products.

Pork-based snacks are the biggest hits (anything bacon does well), with pepper and teriyaki flavor profiles leading the way in the beef varieties. Poultry, he said, continues to be a struggle.

“Newer flavors of all sorts do well for 6-9 months, but then they fade away,” Cote said. “Consumers tend to regard non-traditional flavors as limited editions. They try it, eat it for a while, then grow tired of it.”

“As grocery and other mass merchandisers use this category as more of a volume driver, promotion has been essential,” Cote said. “Innovation over the past 24 months has centered on bacon, but gourmet jerky seems to be trying to emerge as a category. Beef inflation seems to be holding this emergence down from being all it could be.”

Plaid Pantry stores offer around 70 meat snack SKUs. They are displayed in four areas in the stores—as a cooler topper, on an end cap, inline and on the checkstand. Because the category changes so quickly, the company-stocked SKUs are reviewed and revised, in part, based on current product innovation and promotional opportunities.
Recent research indicates that there is plenty of room for meat snack sales growth. More than 90% of respondents in a survey conducted by Nielsen admitted to snacking daily, and one in four has a snack 3-5 times a day.

As those consumers move away from eating the traditional three meals a day and are snacking throughout the day instead, it’s important for them to keep nutrient density in mind when choosing what to snack on, said Susan Dunn, executive vice president of global professional services at Nielsen.