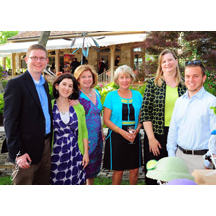 The Miller Oil Foundation (Miller’s) distributed nearly $30,000 to charities in the Hampton Roads area this fall.

The Foundation’s mission is to help people help themselves and those around them through the meaningful and enthusiastic involvement of the Miller family members, and staff and supporters of Miller’s. Through its annual fundraisers, the Foundation brings communities together to help others in need.

Without the support of Miller’s staff and supporters, this amazing accomplishment would not have been possible. The Hearts of Hope campaign, which is run through Miller’s Neighborhood Markets in January and February, raises significant funding each year. The Foundation’s annual Charity Golf Classic and Chairman’s Reception are their largest fundraisers of the year, sponsored by Miller’s top vendors. Among many other contributors, this year’s Premium Sponsors included 7-Eleven, Air-Serv, Coca Cola, JT Davenport, Pepsi, S and D Coffee, Southern Auto, and Williams Mullen.