For more than two decades, Pak-A-Sak has been raising money for local communities. 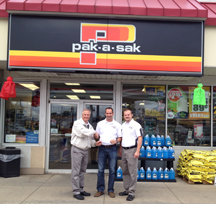 Named after the company’s founder, who passed away in 2012, the annual event has been exclusively supported by the company’s vendors and suppliers since its inception in 1993.

This year, the Portland, Ind.-based convenience store chain chose  to make the regional chapter of Youth for Christ its exclusive benefactor. Youth for Christ serves the five county region of Adams, Blackford, Grant, Jay and Wells.