NOCO Express finds itself buried along with many other western New Yorkers. 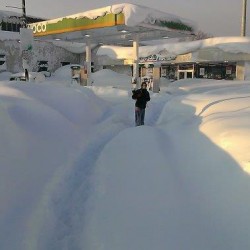 Like thousands of stranded New Yorkers over the last few days, employees of NOCO Express found themselves buried to the hilt in one of the largest snowstorms to every hit the Buffalo area.

In western New York, locations around Buffalo were covered with massive mounds of snow—six feet in some areas. Mike Newman, executive vice president of Tonawanda-based NOCO Energy Corp., said the day of the storm brought sunny skies, but a huge snow cloud arose from the south. NOCO operates 37 locations in the area—several were affected.

“The affected areas got up to 80 inches; where our office (in Tonawanda) received only 5 or 6 inches,” Newman said.

“This has really taxed the system for our associates, deliveries and access,” he continued. “We had one store that had near 20 people sleeping at it for three nights. There were cars abandoned all over the lots. The snow fall rate was so exceptional that it turned all access off.”

Western New York finally climbed above freezing over the weekend, with temperatures expected to approach 60 degrees on Monday, raising worry about rapidly melting snow and the threat of flooding.

“The state, the county and the local officials have all been great,” Newman said. “Hopefully we will be back on track before Thanksgiving.”