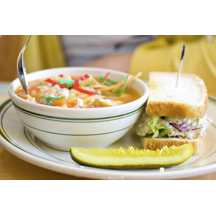 Trend reports from research firms can tell you a lot about what foods and flavors are craved by America’s taste buds. But c-stores don’t have to reinvent the wheel each time to keep their lunch and dinner menus fresh and relevant.

When incorporating the latest craze into your foodservice menus, it’s important to remember who you are and who your customers are, said New York-based restaurant, retail and hospitality consultant Arlene Spiegel. Because credibility is key to building a loyal clientele.

“You have to be able to deliver authentic flavors in a quality product,” Spiegel said. “And any menu addition has to meet the convenience criteria that bring these customers to you in the first place.”

She pointed to the example of Asian flavors that have been trending for quite a while and are predicted to continue to gain in popularity. One easy menu addition, for example, might be a dumpling.

“It’s portable and can be eaten in the car,” Spiegel said. “Adding crispy wontons and an Asian sesame dressing to a salad offer other ways to bring in the ethnic influence.”

Many manufacturers, suppliers and distributors—including regional ones—are offering quality ethnic products that can be prepared and/or packaged in c-stores, she said. Convenience stores also have ample opportunity to create different flavors from ingredients already in their inventory.

“You can take a basic offering such as a turkey or chicken sandwich and make it Mediterranean by adding cucumber and a few herbs to yogurt to make a tzatziki sauce to spread on instead of mustard or mayonnaise,” Spiegel said.

Spiegel also suggested putting meal combos together. For example, a Mexican-inspired meal could include tortilla soup, a half sandwich of turkey with chipotle mayonnaise and a salad with salsa dressing.

“The customer gets lots of authentic flavor at low risk to the retailer,” she said.

Pushing LTOs
Southwestern fare is always trending at Corner Store convenience stores, which has 1,040 locations in Texas, Arkansas, New Mexico, Louisiana, Colorado, Arizona, Wyoming and California. So it was no surprise when the chain had a hit with a limited time offer (LTO) tequila lime sausage last summer.

“Different kinds of sausages allow us to keep our roller grill contemporary and fun,” Poye said.

Mini beef tacos, made in the company’s proprietary commissary, go from snack to meal when eaten in multiples. Corner Stores also offer tamales made by a Texas supplier. Some of the stores have them year-round, others only during the holiday season when “they really come on strong,” he said.

“Some customers put them on top of a salad, as they would chicken, to make a heartier meal,” he said.

And it’s not just ethnic flavors that are popular. Americans have also had a lasting love affair with comfort foods.
Corner Store took pie, always a favorite comfort food, to another level when it introduced puff pies last year. They are now available in 400 stores.

The puff pie is a flaky pastry dough hand-folded around savory fillings. Corner Store’s commissary produces them and they are sent frozen to the stores to be baked off in convection ovens.

About five ounces in weight, one pie makes a light snack, while two make a satisfying meal, Poye said. The stores usually carry two varieties of the pies at a time and they sell for $1.99 apiece.

One particular crowd favorite is filled with turkey and Hatch chile peppers (the peppers are grown in Hatch, N.M.). A recent LTO puff pie was filled with spinach and feta cheese.
December’s LTO is a Hispanic-inspired ticadillo norteno, which is filled with seasoned ground beef, carrots, potatoes and spices.

“These pies give us the flexibility to change flavors with the seasons and try new things that we think our customers might like,” he said. “They also give us a signature product that customers can’t get anywhere else.”

Poye noted that many customers like to mix and match products to make a meal. For example, they might pair a puff pie with a taquito, chili dog or other roller grill item.

LTOs make it easy for the stores to express the chain’s creativity, stay seasonal and keep up with the most current trends, said Giant Eagle spokesperson Daniel Donovan. One recent success was the Pilgrim Sub, made with stuffing bread filled with roast turkey, white cheddar cheese, gravy and cranberry relish. Another was the Kielbasa Reuben Blitz.

“GetGo’s seasonal and limited time offerings are created by our team through a combination of product research, consumer research and national trends,” Donovan said. “We look to introduce a variety of new and unique flavors such as home-style and ethnic flavor combinations, topping choices and bread flavors.”

Many recent research reports emphasize that consumers are looking for more healthful selections for lunch and dinner. Pilot Flying J has taken this trend to heart with its new Travel Well program, which focuses on the more health-conscious options available at the stores. The program debuted in November.

There are more than 650 Pilot and Flying J travel centers and plazas across the nation. Ten of the stores have a proprietary foodservice concept called PJ Fresh Marketplace, just launched last year, featuring hot, home-style platters including meatloaf and roasted chicken, as well as fresh-made salads and pizza.

“Travel Well reminds professional drivers and everyday highway travelers about the importance of fueling your body with healthful and nutritious foods while on the road,” said Anne LeZotte, communications manager for Pilot Flying J.

The program has its own Website featuring a blog offering tips to help consumers eat healthfully while traveling. Pilot Flying J has named Pete Thomas, TV’s “The Biggest Loser” Season 2 At-Home Winner, as its “Health Champion” and he is featured on the blog and on other promotions for Travel Well.

Think in Thirds
To make the most of valuable merchandising space, foodservice consultant Arlene Spiegel counsels retailers to break their foodservice offering into thirds. The first third consists of traditional items such as the chicken club sandwich.

The second third uses the same fully prepared chicken breast, but gives it a brush of teriyaki sauce and puts it over vegetables to become a Japanese dish. This gives the retailer the opportunity to create exotic or signature items that cannot be found at other c-stores or restaurants.

Finally, the last third should feature combinations of items in your store’s inventory. Her example was mixing apples, raisins and walnuts with the chicken to make a Waldorf salad.

“Using the same basic item, you’re creating three different culinary points of view,” she said. In the end, retailers should strive to:
• Deliver authentic flavors.
• Work with manufacturers, suppliers and distributors.
• Use ingredients in your inventory.
• Offer new twists on comfort foods.