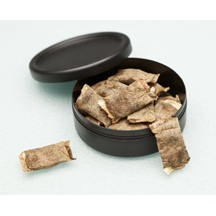 Despite the popularity of electronic cigarettes and the gloominess of regulatory concerns, smokeless tobacco continues to be a significant seller for convenience stores.

Because smoking restrictions have increased and the sale of cigarettes continues to decline across the U.S., it’s not surprising that smokeless tobacco sales have remained on an upswing.

According to IRI, the Chicago-based market research firm, convenience store sales for the smokeless tobacco segment rose 5.61% to $5.4 billion for the 52-week period ended Oct. 5, 2014. Within that, chewing tobacco/snuff accounted for nearly $5.3 billion, up 5.30%, compared to the same period last year.

Comparably, spitless tobacco saw sales reach nearly $201 million, an increase of 14.37% over the same period in 2013.

Category Pressures
Still, the segment faces pressure on a few fronts, including the popularity of the multibillion-dollar e-cigarette business, which is rapidly evolving. In addition, health regulations and projected taxation policies continue to shadow smokeless tobacco, potentially impacting future sales.

Recently, the Department of Health and Human Services in Westminster, Mass. proposed banning the sale of all tobacco products. This includes, but is not limited to: cigarettes, cigars, little cigars, chewing tobacco, blunt wraps, pipe tobacco, snuff, or electronic versions of cigarettes, cigars, pipes, hookah, and any other products that vaporize tobacco, according to the proposal. The potential ban would be the first of its kind in the nation.

Comparably, in Pennsylvania, the Philadelphia City Council proposed imposing local city excise taxes on smokeless tobacco products, as well as cigars, electronic cigarettes and nicotine liquid to be used in electronic cigarettes.
Such policies are troubling for many convenience retailers.

“Our members are counting on us to continue the fight against legislative efforts that either tax smokeless tobacco products, or that include smokeless in efforts to restrict the age that young people can purchase traditional tobacco products,” said Sal Risalvato, executive director of the New Jersey Gasoline-Convenience-Automotive Association in Springfield, N.J. “Our members are seeing sales of e-cigs and vapor products replace the lost revenues realized from lower cigarette sales. Profit margins are healthier on smokeless tobacco, so it is important to them that we be vigilant in our efforts.”

“It’s getting harder to sell tobacco,” said Will Carne, Jr., who with his wife Debbi owns the Nano Seconds Convenience Store chain in Escanaba, Mich. “All the requirements that keep coming up are making it more difficult. It’s putting a lot of burden on the retailer.” Displays are the way to draw consumers’ eyes, he said. “But you’re limited in the way you can do them. You can’t really display it.”

Still, c-stores aren’t giving up on smokeless tobacco just yet.

Remaining Steady
“Smokeless to me means what’s selling are vaporizers and e-cigarettes,” said Carne. As for smokeless tobacco, he added, it has come to be a steady business. “That’s not going to change much.” His set includes about a dozen SKUs and takes up about two feet of shelf space in his store. “Grizzly Long Cut Wintergreen is the only one that sells, and then you’ve got Skoal and Copenhagen a little bit.”

There’s growth potential in his smokeless tobacco set, Carne said, but is he’s unsure what the future holds as legislation and regulation continue to inhibit sales, concluding “it’s definitely a huge factor in our business.”

“I think smokeless will be pretty stable; I don’t really see that declining,” Carne said. “There are a lot of places where you can’t smoke legally, so that’s where your smokeless is going to increase in sales, or at least maintain the sales they’ve already got.”

Looking south to Illinois, smokeless tobacco sales have been steady for Diana Rivera, category manager at Gas N Wash convenience stores in Mokena, where Skoal Extra and Grizzly Long Cut Wintergreen are among the top performers.

Gas N Wash only maintains smokeless promotions through its distributor, Eby-Brown. One of the most effective offerings is two cans of Skoal for a price of $7.50. While there is no sampling, suppliers occasionally hand out coupons for free cans in order to spur trial sales.

“There are a lot of regulations,” Rivera said. “You can’t advertise any smokeless tobacco or nicotine products. It’s been like that for years.”

Like Carne, Rivera is focusing more attention on vaporizers than on smokeless tobacco because “that’s the thing that’s selling now.”

Carne hasn’t found one segment cannibalizing the other, however.

“I think it’s only the people who are trying to quit smoking who are going to the vaporizers,” Carne said. “I don’t know if they would start up on chew, because that would be worse.”

Nachhattar Chandi, CEO and principal of the Indio, Calif.-based Chandi Group USA, owner and operator of 17 ARCO ampm convenience stores, has seen smokeless tobacco sales drop by 20% so far this year, compared to 2013. The biggest reason for the decline is the growing popularity of e-cigs among customers.

Thinking Long Term
Tom Pirko, managing director of BEVMARK Consulting in Buellton, Calif., believes c-stores can continue to generate strong sales from smokeless, but that time arguably isn’t on the retailer’s side.

“We work with brands and categories where occasionally we say, ‘Just harvest it,’” said Pirko. “We know where it’s going, and it’s not going in the right direction—and you are better off taking the best deals you can, because those who supply in the category are challenged. So you just accept the fact that it is diminishing.”

The implications of that, he said, are obvious. “You’re going to be giving it less space, you’re looking for winners that are going to challenge it.” The approach is a pragmatic one, he added. “There are times when you don’t devote your time, your energy and your resources to something that’s going in the wrong direction. What you do is just sort of profit from it the best you can.”

Pirko explained that health concerns were part of the momentum slowdown. “The trends are working against it. Fewer and fewer young males are indulging. Whereas once it was looked at like it might be sort of trendy, there have been too many baseball players getting cancer of the mouth. The word is out.”

The smokeless tobacco category had benefitted from a renewed interest in the category, and a concomitant sales surge, Pirko said.

“But I’m working with a number of brands now where they kind of go sideways; they go up and then they fall back down because there is what might be called a fashion element,” Pirko said.

Instead, he’s advising his clients to look farther out, at factors shaping the smokeless market, and then strategize on how many resources to invest in the trending market.

“Our clients are trying to figure out not just what happens to have a nice little bump now, but how they are going to be involved further down the road,” Pirko said. “I just don’t think it’s going to stay.”

To maximize sales in smokeless today, Pirko recommended, retailers should concentrate on price.

“Just make it cheap. Price it right,” Pirko said. “You have to lay off those discounts on suppliers, because they’re the ones who have to figure out the long-term trends. But for the retailer, the convenience store owner or chain category manager, you create value.”