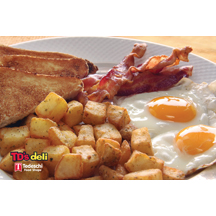 Though quick-service and fast casual restaurants keep ramping up their a.m. game, c-stores can keep up with the best of them as industry retailers share some of their most eye-opening products and strategies.

In the breakfast arena, there’s no time for convenience store retailers to sit back on their muffins (English or otherwise) and just wait for customers to come through the door. Not while quick-service competitors such as Dunkin’ Donuts and Starbucks continue to innovate with new products and services.

For example, in early November, Dunkin’ Donuts rolled out its version of the super-trendy, hybrid croissant-doughnut. The company also recently added its spicy Smoked Sausage Sandwich, Angus Steak and Egg Breakfast Sandwich and Angus Steak and Egg Wake-Up Wrap which, while not exactly new, were extremely popular when they were introduced last year as limited time offers (LTOs).

Comparably, Starbucks, is focusing on the service side by expanding the use of its mobile application. The coffee giant recently announced that it would add delivery in “select markets” in the second half of 2015.

But just because the quick-serves are making all the headlines doesn’t mean that convenience stores are lagging behind. Far from it, said Maeve Webster, senior director for Datassential research company.

“Convenience stores are upping the game when it comes to food, and breakfast is a large part of that,” Webster said. “Breakfast is the only daypart that is growing organically and driving industry growth. The c-store leaders are approaching their foodservice from a restaurant sensibility while leveraging their advantages as far as speed and convenience.”

Take Tedeschi Food Shops, which has 186 locations in Massachusetts and New Hampshire. For Tedeschi, breakfast “is a huge part of the overall business,” according to Joe Hamza, the chain’s vice president of sales and marketing.

Twenty three of the locations have in-store TD’s Delis where made-to-order foods are available. The rest are serviced by the company’s proprietary commissary.

“Breakfast is one of the fastest growing parts of the business at all of our stores,” he said. “It has grown double digits on a year over year basis.”

Hamza believes one reason the segment continues growing is the company’s commitment to using the freshest, most wholesome ingredients such as real eggs as opposed to many of the fast-food restaurants that use frozen product. (In a recent survey, almost half of consumers told Datassential that they were interested in premium ingredients at breakfast.)

Another is the constant evolution of the menu to bring new and more exciting flavors to the forefront. As an example, he cited the made-to-order breakfast burritos which were introduced a few months ago at the TD’s Deli stores. The burritos are available in six varieties including steak, bacon and veggie versions and retail for between $3.29 and $3.69.

“We know that people are looking for more flavor in their everyday breakfasts, especially the Millennials, who are always looking for something more interesting,” Hamza said. “Our customers love these burritos.”

Convenience and Value
Value is also an important part of the breakfast equation. For customers who are looking to get the most quantity of quality food for their dollar, TD’s Deli also serves homestyle breakfast meals. The Bounty offers three eggs and a choice of sausage, bacon, steak or corned beef with hash browns and an English muffin. TD’s Bad Boy includes three eggs, cheese and a choice of two meats. Both sell for $4.99.

“Everything is made to order so they taste like homemade or even better,” Hamza said. “It’s mostly construction workers, landscapers and other blue collar customers who choose these options.”

Keeping customers coming back for breakfast day after day requires offering variety. One easy way to vary the offerings is to use unexpected breads and other carriers, said Shayna Snyder, culinary project coordinator for Chicago-based Culinary Visions Panel research firm. She suggested waffles, pancakes and French toast as options. In a survey of c-store customers, Culinary Visions Panel found that breakfast pizza was in demand.

One chain that has consumers’ desires for interesting carriers covered is Crosby’s convenience stores, which has 47 locations in western New York and northwestern Pennsylvania. On the Crosby’s Corner Café menu are maple cake sandwiches, breakfast pizzas and signature Crosboli.

A maple cake is a maple-flavored bread that’s like a softer English muffin, said Doug Galli, Crosby’s vice president and general manager. Customers can get it filled with egg, meat and cheese.

“They’re our number two best selling breakfast sandwiches,” said Galli. “The only ones that sell more are our croissant sandwiches.”

Creating Excitement
Breakfast pizza is also a popular item on the menu at Crosby’s Corner Café. The pizza, which is made with white sauce, cheddar and mozzarella cheese, egg, choice of meat and one vegetable, is offered whole or by the slice. It is made with a dough that comes to the stores frozen to be proofed, topped and baked.

“Slices are big sellers for us and, while we don’t sell a boatload of the whole pies and sheets, we get a fair amount of local businesses coming to us for them to serve at their morning meetings,” Galli said. “They’re definitely worth keeping on the menu.”

Looking for another use for the pizza dough, Crosby’s developed a signature item they call the Crosboli last summer and, Galli said, “it is fast becoming one of the better selling items although it has mostly been promoted by word of mouth.” For the Crosboli, pizza dough is wrapped around white sauce, egg, mozzarella and cheddar cheese and choice of meat and is sold whole ($2.99) or by the half ($1.99).

When it comes to service, Crosby’s Galli is not worried about Starbucks delivering its coffee to customers. He sees his stiffest competition coming from the drive-throughs such as McDonald’s and Tim Horton’s.

Because the company believes that offering better food can trump the convenience of the drive-through, Crosby’s has been retooling its basic breakfast menu. It is testing a new egg patty, which looks like a just-fried egg and has better flavor and general mouthfeel. The company is also testing a new chicken and biscuit sandwich for breakfast.

Snyder suggested that c-stores can also boost the convenience factor for customers by offering an order ahead option on their apps. Runners could then deliver the food at the pumps.

On the service front, Tedeschi bests much of the competition by serving breakfast all day.

“There are many consumers who work different shifts and are looking for breakfast at various times of the day,” Hamza said. “Very few quick-service restaurants offer breakfast all day and we think that’s a real competitive edge for us.”

And it’s not just shift workers who are looking for breakfast foods outside of traditional breakfast hours.
“A growing number of people, again primarily younger customers, are looking for protein-rich foods throughout the day and eggs are pure protein,” he said.

4 Tips To Boosting a Breakfast Program
• Convenience stores should approach their foodservice, including breakfast, from a restaurant sensibility. Know what your competitors are doing and how they’re doing it.
• Differentiate from fast feeders by using premium ingredients.
• Consumers are looking for more flavor and variety.
• Breakfast time can be anytime for customers.