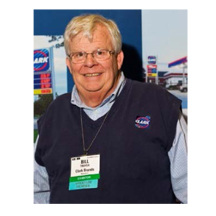 Troyer ‘s career began with Union Oil as a dealer rep in Newark, Ohio, and he spent 17 years with Clark Brands.

Bill Troyer, a seasoned, 45-year veteran of the petroleum industry, will be retiring from Clark Brands, effective Dec. 31, 2014.

Troyer has had 17 exciting years with Clark Brands, where he started at Clark Refining and Marketing as an account manager. In 2003, Troyer introduced and implemented the Clark Brands license program along with signing up the original 20 marketers and 300 dealers.

While with Clark, Troyer was awarded the Illinois Petroleum Marketer Gas Pump for Meritorious Service to the Industry in 2006. If you were to ask Troyer how he did it he would say, “Listen with understanding, to determine what the customer really needs, before trying to solve with a solution and pick up the phone!”

Troyer received his best education about the business and practice from working with dealers, truck stop operators and marketers while he was with Pure Oil/Union Oil/Unocal/Uno-Ven from 1969-1997. He will argue that not much has changed when dealing with independent oil/gas customers—”listen and shoot straight!”

Troyer ‘s career began with Union Oil as a dealer rep in Newark, Ohio. He held numerous positions in various cities with the company, including dealer trainer, merchandiser, equipment buyer, auto/truck stop sales manager and auto/truck stop area sales manager. His last assignment with the company was regional manager, eastern division for Uno-Ven. He is proud to see many of the young personnel he mentored grow into higher positions of authority and responsibility in the industry today. Troyer’s philosophy was always to try to get rid of the cumbersome non-essential tasks and focus on areas that were productive.

Troyer graduated from Purdue University and served his country in the U.S. Army for three years. Part of his military time included a tour in Vietnam with the 101st Airborne Division as a Platoon Leader and Executive Officer of the 265th Radio Research Company (Airborne), which was attached to the division. When people ask Troyer what he did in the war, Troyer says, “Get the book: The Sentinel and the Shooter by Douglas Bonnot; I am in the book.”

Troyer plans to enjoy his retirement by golfing and traveling with his wife, Vicki. Combined, they have six children and 13 grandchildren who they plan to spend time with as well.