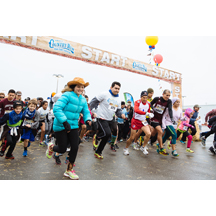 The Country Run raised a net total of $1 million for Big Brothers Big Sisters in the U.S. and Canada and local children’s charities in each of the eight race markets, including revenue from participant registrations, sponsors such as Oak Farms, Anheuser-Busch and Coca-Cola, and Corner Store customers who donated at the register in participating locations.

On Saturday, Corner Store CEO Kim Lubel presented a check for $500,000 to representatives from Big Brothers Big Sisters, the world’s largest donor and volunteer-supported mentoring network. All other event proceeds will go to various children’s charities in each market.

The first Country Run kicked off in Montreal, Quebec on Sept. 13 and ended in San Antonio on Saturday, stopping along the way in Little Rock, Phoenix, Denver, Houston, Austin and Dallas—all cities with a strong Corner Store presence.

From beginning to end, the series attracted more than 20,000 registrations and generated more than 200,000 mentions on social media of the official #CountryRun2014 hashtag.

“For a first-year race, the Country Run has been successful beyond our greatest hopes,” said Kim Lubel, CEO and chairman of CST Brands, Corner Store’s parent company. “People loved the concept, they dressed the part, they loved that it was family-friendly. It gave us the perfect platform to engage our employees, our customers, our sponsors and our communities for a great cause.”