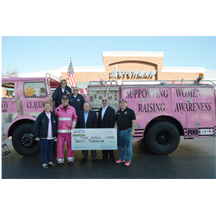 For GPM Investments LLC, community support is the name of the game when it comes to its $1 Million Scratch Card Game and Charity Donation.

GPM’s highly successful $1 Million Scratch Card Game began in 2014. The game afforded GPM the opportunity to simultaneously conduct a contest amongst 13 charities in the North and Southeast. Throughout the duration of the scratch card game, customers were invited to vote on their charity of choice. When all the votes were tallied, Pink Heals was the clear winner of the contest and the $20,000 prize.

On Dec. 16, a GPM Scotchman store, located in Wilmington, N.C., hosted an event in honor of Pink Heals. Pink lemonade and pink donuts were served to customers and team members of the charity. The energy was astounding, as customers stopped by the Pink Heals “mascot,” a giant, pink fire truck, to sign their names and show support of this great cause.

“We are so very proud of the enthusiasm and support of great charity contests such as these,” said Bill Reilly, senior vice president of marketing. “Giving back through community service efforts and charity donations is a positive force that keeps our company moving ahead. Our plan is to continue to hold company-wide initiatives, such as these, where we can provide financial support and awareness to a great cause.”

Reilly went on to comment on future promotions: “We will start a new scratch card game in January 2015 to give customers another opportunity to win $1 million dollars when they register their scratch card code online at www.WIN1MM.com. These game cards also offer in-store scratch and win prizes such as free coffee and bottled water, and promotional coupons. Customers will have the opportunity to receive these game cards through qualifying item purchase and filling up their car at the gas pump.”

GPM Investments LLC is one of the largest privately-owned companies in the convenience store channel of business, currently operating 463 retail stores as well as 115 dealer locations. Upon completion of the current Road Ranger acquisition, GPM will widen their reach to 621 stores and a new total of 11 states. GPM operates under highly recognizable brand names including Fas Mart, Shore Stop, Scotchman Stores, Young’s, Li’l Cricket and BreadBox.