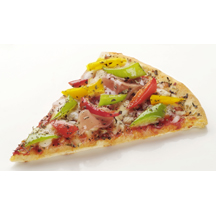 Pizza is America’s go-to food for single dining, group meals or snacking occasions. Because of the trend, c-store sales are mushrooming.

Every week, two out of three Americans eat pizza and the average consumer purchases pizza away from home five times a month—more than once a week, according to a report from the research firm Datassential. In fact, in a survey conducted by Zagat, consumers said they eat pizza about four times a month on average, which works out to 12 slices per person, per month.

U.S. pizza sales totaled more than $38.5 billion for the year ending September 2014, reported PMQ Pizza Magazine. That’s plenty of dough to go around for restaurants and other retailers.

PROPRIETARY PIES
Fresh, hot and fast is how consumers want their pies, which is how they’re served at Kum & Go convenience stores, which has had a proprietary pizza program in place since 1986. Made-in-store pies are available whole or by the slice in 270 of the West Des Moines, Iowa-based chain’s 432 locations, spanning 11 states.

“We chose to go the proprietary route because we wanted to be able to offer the program in the areas we choose without worrying about franchise units and other restrictions that can come with a national brand,” said Greg Tornberg, Kum & Go’s vice president of foodservice.

The dough, which is produced to the company’s specs by an outside supplier, comes frozen—to be thawed, proofed, topped and baked as needed. Approximately 125 of the c-stores have open kitchens that allow consumers to see their pizzas being made.

“In those stores, the theater of making the pizza is a big attraction,” Tornberg said. “It clearly shows customers that we take our pizza seriously.”

But, Tornberg added, even in the stores that do not have the space for an open kitchen and must bake in the back, shoppers can still smell the aromas wafting from the oven.

“Pizza is a big part of Kum & Go’s foodservice program because it appeals to both males and females, all ages and consumers in all parts of the country,” he said.

LEVERAGING BREAKFAST
Tornberg noted that pizza sales are increasing in terms of “units sold per store across our network.” He attributed part of growing sales to the fact that consumers are buying more pizza throughout different parts of the day, beginning in the morning.

He described the chain’s breakfast pizza, which is topped with eggs, Canadian bacon, sausage, bacon bits and hash browns as “a very solid performer.” Slices sell the best, but some customers purchase whole pies to take to work during the week and to serve to family and guests at home on the weekends.

OPTIONS FOR EVERYONE
Consumers are also snacking more and, for many, pizza is the snack of choice throughout the day, Tornberg said. To meet the demand, Kum & Go begins offering the rest of its pizza selections at 10 a.m.

With customization being key in every aspect of foodservice these days, it’s no surprise that the “create-your-own” pizza is the retailer’s best seller. In addition to choosing their favorite toppings, customers now have the option to select between regular or thin crust. The thin crust version was introduced this past September and has been very enthusiastically received, Tornberg said.

While both formal research and anecdotal evidence confirm that pepperoni is the all-time top-selling topping, Kum & Go also makes sure it keeps abreast of trending ingredients and flavor profiles by keeping seven specialty pizzas and a limited time offer (LTO) variety on its menu. Among the specialty pies are pickle-topped cheeseburger and pineapple-topped Hawaiian varieties.

To satisfy customer cravings for spicy flavors, Kum & Go has a Doritos chip-topped taco pizza on its permanent menu as well as a chipotle-chicken bacon ranch pizza that was first introduced as an LTO. Another recent LTO was a sriracha sausage-topped pie. “The sriracha sausage pizza worked out really well for us,” Tornberg said. “Consumers have adopted sriracha on condiment stations at our stores, so it seemed like natural extension to take that sauce and offer the same flavor profile on a pizza.”

LTOs are usually kept on the menu for between three and four months. “Pizza is a very adaptable platform that allows us to bring flavors on trend in and out of the business very efficiently,” Tornberg said. “And LTOs assure that our customers will always have something new to taste and our staff will always have something new to sample and talk about.”

“If I’m a customer at the pump, I may or may not see a sign in the window and, even if I see it, the likelihood is that I will just pay at the pump and be on my merry way,” he said. “To be really effective, a sampling program has to go beyond the four walls of the store, out to the pumps and across the street to the shopping centers and other local businesses.”

Matthews pointed out that by assertively sampling, retailers can build a profitable catering business, even if they don’t offer delivery service. “When I was the marketing director at Little Caesar’s, catering paid big dividends even though customers had to pick up their orders,” he said.

At Kum & Go, Tuesdays and Thursdays are heavy sampling days both inside and outside of the stores, Tornberg said. “We get some great reactions from customers when we bring out a fresh, hot slice of pizza to them while they’re pumping gas.”

For grand openings, remodels and other special occasions and events, the stores take samples to neighboring businesses.

In addition to offering store-baked whole pies and slices, both brands also offer the take-and-bake option. The pizzas take-and-bake pizzas are delivered pre-topped and frozen to the stores.

Customers can purchase the Papa Primo’s pie refrigerated from the cold case and the Piccadilly Circus one from the freezer. Unlike store-baked pies and slices, take-and-bake pizzas can be purchased with food stamps, Roccagli said, giving the stores an opportunity to sell the product to an expanded customer base.

About a year ago, Piccadilly added calzones to its program. They can be baked in-store or held in the cooler for home cooking.

“The calzones have been a huge success and they are additional sales rather than taking away from pizza sales,” Roccagli said. “We haven’t seen any trade-off or cannibalizing of pizza sales, just an increase in sales in the overall pizza category.”

Empire has also added Papa John’s pizza as one of its preferred vendors. The national pizza brand has recently developed a program specifically for c-stores that offers a limited menu and requires no delivery service. Papa John’s crust and other ingredients arrive frozen to be assembled and baked in the stores.