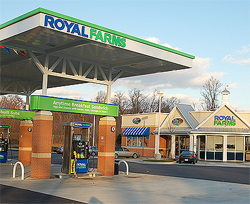 Royal Farms, a Baltimore, Md.-based c-store chain, is looking to expand in the Philadelphia metropolitan area—also known as the Delaware Valley—an area long dominated by Wawa, where Sheetz and On The Run also compete for customers, the Pennsylvania Business Journal reported.

Royal Farms has 160 stores in Maryland, Delaware and eight in Pennsylvania, though mostly in the central part of the state.

The company doesn’t have a specific number of stores planned for the Philadelphia area, but one store is already under construction and scheduled to open by the end of the year on Stewart Avenue just off the Ridley exit of I-95. Two other sites are currently going through the approval process.

Royal Farms looks to differentiate itself from Wawa with it’s “world-famous fresh, never frozen Royal Farms chicken,” Ed Stronski, a spokesman at Royal Farms told the Pennsylvania Business Journal. “We hand-bread our chicken right in our stores using our unique blend of spices.”