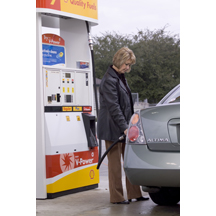 The levels of consumer optimism are the highest measured in the more than two years.

For the first time in two years, a majority of Americans are optimistic about the economy, thanks to the continuing slide in gas prices.

A survey of gas consumers found that 57% of Americans are optimistic, including nearly two-thirds (65%) of those ages 18-34.

The levels of consumer optimism are the highest measured in the more than two years that consumer sentiment has been measured by the National Association of Convenience Stores (NACS). Consumers are obviously pleased with the continued falling price of gasoline. Almost nine in ten consumers (88%) say gas prices are lower today than they were last month, and they report that gas prices are 50 cents per gallon lower than they were 30 days ago.

“Consumers generally pay down expenses in January after holiday spending so it’s not surprising that they may not shop more as gas prices fall. But if consumers do, in fact, travel more this month it would be a significant departure from previous years when January travel tended to fall off after the holidays and as winter weather keeps people indoors more,” said Jeff Lenard, NACS’ vice president of strategic initiatives.

NACS, which represents the convenience store industry that sells 80% of the gas sold in the country, conducts the monthly consumer sentiment survey to gauge how gas prices affect broader economic trends. The NACS survey was conducted by Penn, Schoen and Berland Associates LLC; 1,108 gas consumers were surveyed Jan. 6-8, 2015.