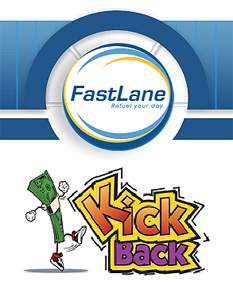 Loyalty has its rewards, and for Angela Easley, of Ashland, Mo., her loyalty has earned her a trip to Arizona for the Big Game between the Seattle Seahawks and the New England Patriots on Feb. 1.

That’s because Easley, a customer at FastLane Convenience Stores in Missouri, was KickBack Points’ 2014 Fantasy Football grand prize winner. FastLane, which is a Phillips 66 fuel marketer, joined the KickBack Points program in 2012.

“This is so exciting. I was literally shocked to get the phone call that I had one. I thought it was joke,” said Easley, who has been a KickBack cardholder for the past four years. “My husband Sam and I just celebrated out 10th anniversary so this is going to make our anniversary extra special.”

KickBack’s Fantasy Football contest, now in its second season, allows KickBack cardholders to build a Fantasy Football team with each purchase using their KickBack Points’ card. They compete weekly against other cardholders for the chance to win an all-expenses paid trip for two to the National Football League’s (NFL) Big Game.

KickBack cardholders must enroll their KickBack Points Card in the fantasy football program by visiting www.kickbackpoints.com. The KickBack Website also details player performance, official scoring and a weekly leader board.

“The KickBack Fantasy Football promotion became an instant hit with our customers and our retail partners,” said Patrick Lewis, CEO of KickBack Rewards Systems. “KickBack’s loyalty solutions help retailers make the shopping experience more personal. Customers absolutely love recognition and having a connection with the brands they trust the most. But most of all, customers and retailers alike enjoy the opportunity to reward consumer loyalty.”

Easley, who said she shops at FastLane, 4-5 times a week, joined the KickBack Points program at the urging of a store sales associate who explained the card’s benefits.

“I was already a regular customer of FastLane for its soda fountain,” said Easley, who is Kansas City Chiefs fan that will be rooting for the Seahawks in Arizona. “A sales associate told me that I could be earning discounts and free drinks if I signed up for the program. It was a no-brainer and I have been hooked on the program ever since.”

“After winning, Angela came back to our store and thanked Claire, the cashier that convinced her to get a Kickback card. What that says about our brand is that we have great cashiers who are engaged in the Kickback program and see the value for our customers. They want them to get special discounts, bonus points and chances to win fabulous gifts,” said Mary Banmiller, director of retail and hotel operations for Warrenton Oil, which operates 33 FastLane convenience stores. “But it is our customers that have embraced the program. We have had a lot of success with specific targeted bonus points and discounts. It’s an exciting opportunity and further shows the wonderful benefits of participating in the KickBack Points program.”