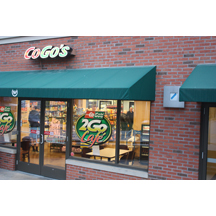 Though its legacy derives from the dairy business, CoGo’s commitment to modern convenience retail is reshaping its future.

Since Pittsburgh-based CoGo’s Co. chose to expand its operation in the shadow of West Virginia University (WVU) more than a year ago, the return on investment has been noteworthy. Not only did the c-store chain expand its geographic footprint, it has been successful in getting its brand in front of a large college crowd.

Unlike bigger competitors like Sheetz and Wawa that heavily populate the outlying areas near Interstate 79, CoGo’s chose to move closer to a strategic population in Morgantown, W. Va.

With its newest store format, the company staked a claim at Beechview Place, a square-shaped development on Beechurst Avenue that was built to provide students with upscale and secure apartment-style living close to the WVU campus. The mixed-use living complex is built with four exterior walls facing out, with an open-air courtyard located in the middle.

The CoGo’s site resides on one corner of the bricked residential development and customers can gain access from the street, or through the back entrance via the courtyard. Arguably, it’s not your typical c-store configuration.

“Look at this grass,” said Kevin Donas, CoGo’s director of operations, as he pointed to the courtyard’s specialized turf that stays green even in inhospitable weather.

Inside the store, the layout is just as interesting. On this day, David Heisler, executive vice president and COO for CoGo’s, is conducting a quick tour of the 4,100-square-foot building, which is larger than many of its 54 other locations found in western and central Pennsylvania, West Virginia and Maryland.

Rows of cooler doors take up one interior wall, which seems far away from an open foodservice space that offers patrons an elongated coffee row, which is adjacent to a salad bar and grab-and-go shelves with fresh fruit, a cooler of cold items and large dispensed beverage fountains.

Around a corner, a full-crafted kitchen produces entrees ranging from beef burritos to pork tamales to chicken Florentine served by an attentive staff. This is an important step in the company’s evolving foodservice program, explained Ray Kostrzycki, director of marketing for CoGo’s, because at one time, foodservice was just a meager contributor to the company’s overall corporate profit structure.

Dairy Beginnings
The origin of CoGo’s dates back to the turn of the 20th century and a dairyman named William Colteryahn, who founded Colteryahn’s Dairy. In 1917, Colteryahn’s son, Carl opened the Colteryahn Dairy on its present site in Carrick, Pa. For many years, home delivery was the main business activity. As Divco milk trucks replaced the horse and wagon, the business quickly expanded to selling fresh milk to retail markets in addition to home delivery.

In the 1960s, Carl Colteryahn’s son, Carl Jr., scouted the convenience store business as the consumer demand for quick trip convenience purchases began. In 1962, through the franchise arrangement with Stop-N-Go Food Stores, the first convenience store was opened on South Park Road in Bethel Park, and that c-store remains open at that location today.

Foodservice was one of the areas CoGo’s decided to commit to. It wasn’t that long ago that foodservice sales accounted for a meager 2% of CoGo’s total sales, which was nothing to brag about, Kostrzycki explained.

About five years ago, company decision makers chose to make over different retail areas, from its coffee program, to its proprietary grab-and-go offerings, to its hot food options. Offerings for breakfast, lunch, dinner and snacks are now readily available in all of its locations.

Like more and more convenience store chains, CoGo’s conducted a hard examination of its coffee program, evaluating components that it could improve. The chain eventually adopted the World Cup brand, crafted by Steep & Brew of Madison, Wis., which is described as“the tangy, lively flavors of Costa Rican coffee, to the bright, sparkling, floral aromas of Tanzanian coffee, to the smoky, tangy taste of classic French roast.”

Another segment that CoGo’s sought to revamp was its CoGo’s 2 Go Café fresh offerings, ranging from breakfast sandwiches, salads and appetizers. After refining the process, grab-and go items that were once purchased at a commissary, are now made on site daily.

“Now people know what they’re getting when they grab a hoagie,” Kostrzycki said.

The result has been a vital jolt to the company’s bottom line.

Social Digest
CoGo’s recently embarked on a new marketing strategy with OpenStore by GasBuddy to extend special discounts and offers to its customers. A new company app is helping drive its loyalty program, and helps drives such things as special promotions and a customer coupon program.

The social media aspect of the initiative also allows the company to track customer feedback, to tweak deficient areas, and expand upon other programs that are getting positive reviews. Not surprisingly, positive reviews are starting to generate from customers—and not just the college crowd.

“It has started to validate what we’re doing,” Kostrzycki said.

Learning Lessons
As unique as the Beechview Place is to CoGo’s current portfolio, there are some operational lessons to be learned at the WVU site that can be extended to the company’s other c-store locations, Kostrzycki said.

One lesson on the foodservice side is experimenting with the menu to ensure that food offerings are indeed what customers want. So far, the c-store is tracking where co-branding opportunities are working well and other locations where proprietary programs are a better fit.

And then there are crossover foods that are popular on every site. For example, the company’s homemade pepperoni rolls seem to draw waves in Morgantown, Pittsburgh and other locales.
Like the nosh, CoGo’s is on a roll, with no let-up in sight.

From that first store in the South Hills of Pittsburgh, CoGo’s Co. has grown to operate 55 stores today. The c-store division is still owned by Colteryahn family, which still operates the last dairy within the city of Pittsburgh: the Colteryahn Dairy.

According to the company’s historical records, Colteryahn Dairy is the oldest dairy in Pittsburgh, dating back to the 1870s when the founder, William Colteryahn, arrived in Pittsburgh with his family from Hamburg, Germany. At the time, the burgeoning steel town was moving forward with integrated mills and growing manufacturers.

The dairy was established in 1893, when milk from farmers was transported by train and distributed over the area in large containers on wagons. Housewives would come to the wagon with their kettles and pans to purchase the milk.