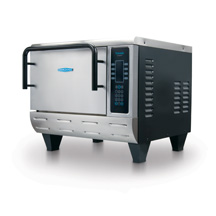 Expanding foodservice offerings often means shopping for new equipment. Retailers share how they are getting the biggest bang for their investment buck.

One size doesn’t fit all, it turns out. At least it doesn’t when it comes to the new ovens ordered for Austin, Texas-based Kwik Chek Food Stores.

When the company’s parent, McCraw Oil Co., recently decided to install new ovens to expand its fresh foodservice program, it proved challenging because of the different sizes and configurations of its stores.

However, John Longden, Kwik Chek’s director of foodservice operations, explained that after much research, the company decided on three different ovens, which used alone or in tandem were an effective solution.

In the last couple of months, Kwik Chek has installed Middleby Marshall PS 628 ovens to five of its stores, particularly to cook pizza and hot wings. “These ovens cut our cooking time in-half compared to the ones we had before and the results are excellent,” Longden said.

In some of stores with more extensive foodservice offerings, Kwik Chek installed Unox ovens, which combine convection, conventional and steamer capabilities. These ovens are used for items that need a longer, slower baking process or require steam while they bake. Longden said the high-tech ovens are good for entrees like meatloaf, pot roast, baked chicken, turkey and catfish. They can also bake dinner rolls and slow-rise doughnuts.

“Baked chicken takes 45 minutes and it comes out with a great slow-roasted flavor,” Longden said.

The third oven, an Ovention, has been placed in two stores so far and is scheduled to be added to three remodels this year. Ovention was designed to fit a smaller footprint and, since it does not emit fumes, it does not require ventilation.

The oven is programmed to cook up to 1,000 different products. All employees have to do is press a button to get the correct cook time. Most food cooks in 2-3 minutes, Longden noted and, since the oven is calibrated to cook each specific product, the oven cooks with extremely reliable accuracy.

Prior to putting in the ovens, Kwik Chek’s fresh foodservice program was limited to mainly fried items, he said. Now the stores can do a wide array of entrees and bakery products. The ovens also allowed the chain to add hot subs to its menu.

BETTER MERCHANDISING
For merchandising its foodservice offerings, Kwik Chek partnered with Hudson Foodservice Equipment to design distinctive hot and cold cases. On the hot case, the top features service wells for items, such as chicken and sides, including macaroni and cheese. At the bottom of the case is a self-serve merchandiser that features prepackaged, grab-and-go hot items.

On the cold case, the top has a station for made-to-order salads, sandwiches and pizza. That case, too, has a self-serve merchandiser for prepackaged grab-and-go foods at the bottom.

These cases are scheduled to be in four of the Kwik Chek stores this year. The first will be in Bonham, Texas, where the store is getting ready to undergo a major remodel.

FOODSERVICE EXPANSION
Cubby’s Convenience Stores, with 33 locations—and another in the planning stage—in Nebraska, Iowa and South Dakota, is also growing its fresh foodservice business. And, in many cases, that means going into stores and making room to put cooking and merchandising equipment.

The chain has also added f’real frozen drink machines to 14 of its stores. Wilson noted that the beverages sell particularly well in rural locations and small towns, particularly those near the high schools and/or sports complexes.

In one store in the Old Market district of downtown Omaha, Cubby’s has a catering service that does a brisk business in hot prepared foods. That store employs a pastry chef and, in addition to using her bakery products for the catering side of the business, has set up two refrigerated display cases to showcase and sell her creations to walk-in customers.

When a meat cutter at the store suggested that Cubby’s add barbecue—a homemade recipe harvested from many barbecue competitions—to its fresh food mix, management agreed and that part of the business has taken off as well. In addition to catering for parties and special events, he takes a large pull-behind smoker to the stores to sell brisket, pulled pork and barbecued ribs.

“People are getting to know us for our barbecue,” Wilson said.

In fact, the meat cutter has done so well with his barbecue that it has become his full-time job. One customer favorite isn’t even a meat item. He takes the macaroni-and-cheese side offered by the Chester’s Fried Chicken program in the store and heats it up in the smoker.

LEADING INNOVATION
Jerry Weiner, vice president of foodservice at York, Pa.-based Rutter’s Farm Stores doesn’t ask for much from his oven. Just that it make a really good grilled cheese sandwich. He found that in a TurboChef version and has come to rely on this piece of equipment for the expansion of the fresh food program that the chain has become known for.

“Because these ovens turn out such a good grilled cheese sandwich, I don’t have to have a panini press,” he said. “You would swear the sandwich came right off of the grill.”

Getting the grilled cheese down pat was only the beginning of Weiner’s plans for the oven. “When I realized it could do that, it opened the door to doing numerous other products,” Weiner said.

So far, Weiner has put the oven to use making Reubens; quesadillas; cheeseburger patty melts and tuna melts; and hot corned beef, brisket and pastrami sandwiches. The stores are also able to cook racks of short ribs, which they sell by the bone in portions of two, three, four or eight ribs. They also carve the short rib meat off to top breakfast sandwiches, burgers and grilled cheese.

“Because the TurboChef oven cooks just about everything, it has allowed me to add between 10-15 new items to our menu using what I already have in inventory without bringing another SKU in.”

Weiner also recently upgraded the warming drawers of his hot food line with equipment from Carter Hoffmann. The new drawer set-up saves space and has a more efficient warming system than the ones used previously.

Forty-seven of the chain’s 60 stores have the TurboChef ovens along with Carter Hoffmann warming drawers.

CHALLENGING STARBUCKS
At Wisconsin’s Mad Max Convenience Stores, the barista-driven coffee program has been a focus for upgrading equipment. The main purchase has been a Macco Sirio S2 LM espresso machine that dispenses shots more quickly than the old ones to expedite service. The company installed one in a store late last year and is planning to put in another one this year.

“We compete head-to-head with Starbucks and we have to be fast as well as good,” said Janiece Maxwell, Mad Max’s chief financial officer. “We’re even putting a drive-through in the new location.”

Mad Max stores also have extensive fresh foodservice programs. In three of the 10 stores, the company has just put in new Henny Penny Combi ovens to cook chicken and pulled-pork, as well as hamburgers and other hot sandwiches.

Whether a c-store is preparing light lattes or robust meats, the need for the right foodservice equipment is imperative if a retailer hopes to offer more than just the regular fare.